Most people will agree that algae are an unattractive and unwelcome addition to an aquarium – especially a planted biotope. It can hinder plant respiration and photosynthesis (hence affecting growth) by smothering the leaves of green plants. Rampant algae growth is particularly relevant in newly setup aquariums. They readily establish in new tanks in a similar fashion to weeds colonising freshly cleared or turned over soil. When an aquarium is first set up with fresh water and new plants, it takes time for the latter to adapt to their new conditions, put out roots and start to grow. Algae adapt far more quickly and an algal bloom occurs as they feed on the nutrients in the fresh water. At this stage the reaction of most people is to change the water and start all over again. This will only aggravate matters, as the new water will once again feed the algae. It is far better to allow nature to take its course and the tank to progress through the natural cycles. Achieving a fully planted aquarium with healthy fish and plants takes time – months, in fact.

Many will be familiar with algae in the form of green or brown encrustations on the rocks and glass in aquaria (e.g. beard algae), as greenwater (single-called free-floating types) or as thin, tough green filaments (e.g. hair algae) which can prove extremely difficult to eradicate. It often comes as a surprise, therefore, to learn that some algae can actually cause diseases in fish.

Like plants, all species of algae need light, water and nutrients to grow. It is up to the aquarist to limit the amount of light and nutrients received by the aquarium in order to keep algae in check. The three main nutrients that algae need are nitrogen, phosphorus and potassium. In an aquarium, these nutrients come from fish waste, uneaten food, the metabolism of beneficial bacteria, and the decay of other organics (e.g. plant debris and even dead algae). Some regions have trace amounts of phosphorus in the tap water. You can reduce the accumulation of nitrogen through water changes; phosphates can be kept in check using phosphate-removal media (e.g. phos-rid) in an external filter or by using reverse osmosis water for the aquarium.

Greenwater: Caused almost invariably by too much light. The name aptly describes its appearance – tank takes on the “pea soup” look. Filtering with micron cartridges or diatom filters will successfully remove these algal blooms. Greenwater is a great source of nutrients (food) for species such as brine shrimp, Daphnia spp. and minute fry and is often purposely cultivated for this purpose.

Brown encrustations (slimy appearance and feel) on plants, dÃ©cor and glass: Often accompanied by poor plant growth. It is an indicator of insufficient illumination. It is easily removed by wiping the surface. 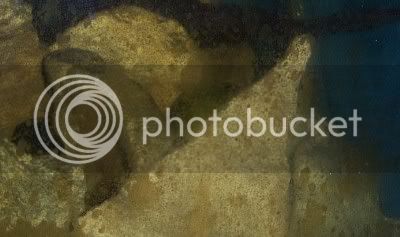 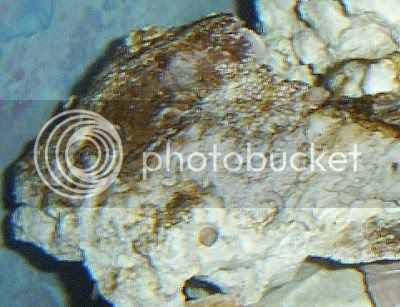 
Green encrustations: Two types: ‘fuzzy” and beard. The fuzzy algae is not of great concern and can be controlled via the addition of grazing fish. It is easily differentiated from beard alga in appearance. It grows in short, single strands of about 2-3mm. Beard algae is more serious. Its individual strands have a very fine texture. It grows in thick, furry patches, up to 4cm. Its resemblance to a green beard gives rise to the name. It cannot be removed mechanically. 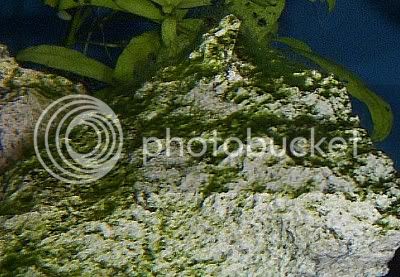 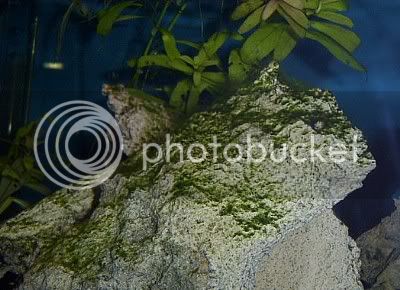 Above photos - "fuzzy" or "beard" algae


Spot algae: The small round green spots that appear on the sides of the aquarium are not algae. These are actually populations of diatoms, microscopic animals that secrete a hard silica shell on which green alga grows. This type of “algae” is the most difficult to remove. A sharp blade works well.

Filamentous algae: Two main types: hair and thread. Hair algae have shorter strands than thread algae (around 5cm in length) and tends to form matted clumps. Thread algae have much longer strands (as long as 30cm) and is often an indicator of excess iron. Both are quite easily removed with a toothbrush. 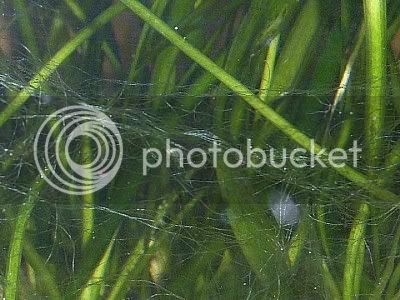 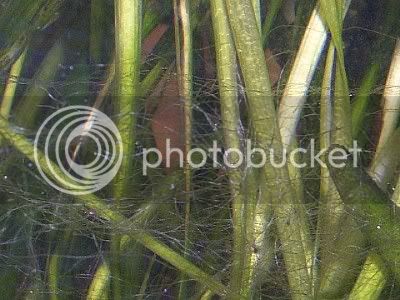 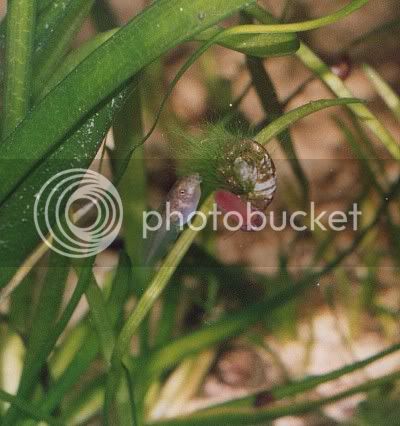 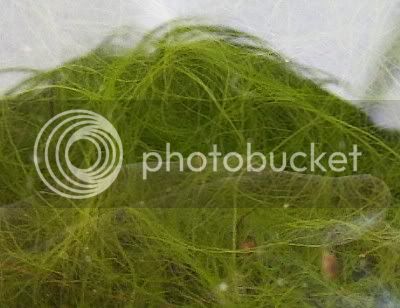 Above photos - forms of hair algae

Staghorn algae: As the name suggests, this branching alga looks like miniature greyish-green stag antlers. It is mostly seen nearer the tank surface, establishing itself on filters and dÃ©cor. It is very difficult to remove mechanically and most aquarists resort to chemical control.

Brush algae: Brush alga is blackish (actually classed as a red algae) in appearance and forms feathery tufts about 2-3mm long. It is a nuisance on dÃ©cor, filters and broad leaf plants especially. Being extremely difficult to remove, chemical additives seem to be the only way to rid aquariums of this menace. True SAE have been found to be somewhat effective in its control. 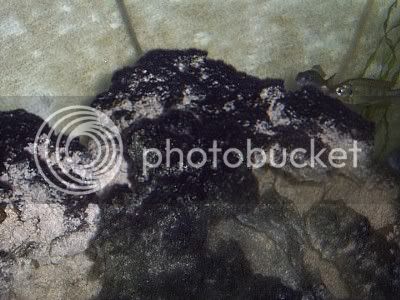 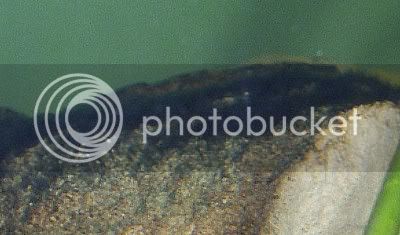 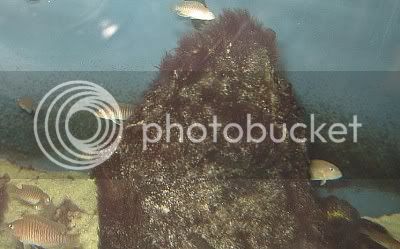 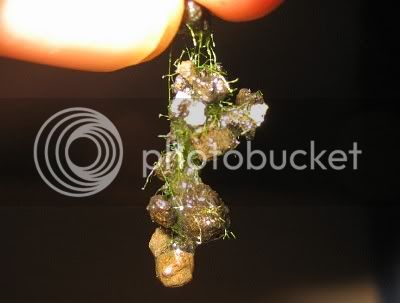 A type of branched alga.

Controlling Algae in the Aquarium.

Following is a list of some suggestions for alga control in your aquarium.

1. Dense planting. Planting your aquarium densely from the onset will help to deter the establishment of algae. Rapidly growing “bunch plants” (plants that are grown from cuttings and sold in bunches at the LFS) fall into this category. They will utilise the nutrients in the aquarium very quickly, making it difficult for algae to compete.

2. Water changes. Regular, large water changes help to eliminate the nitrogenous waste and phosphates that algae need to thrive. Replace half the water every week (or at least every second week).

3. Introduce algae eating fish. There are many suitable species that can be introduced into the aquarium to help control algae. They should be added sooner, rather than later. Do not allow an alga problem to develop before adding the fish. Most fish will not be able to eat enough algae in an all ready overgrown aquarium. If they are sparingly fed, they will be forced to look towards the algae as a food source. Suitable additions include: Otocinclus spp. dwarf plecos, whiptail catfish, and members of the Loricariidae genus and most live bearers (e.g. Mollies). Large plecos are not suitable, as they tend to munch on plants and outgrow the tank. Members of the Corydoras spp. help to stir up the substrate and help deter algae from settling and taking hold.

4. Light starvation. Decreasing the amount of penetrating light that an aquarium receives can sometimes control algae. This action may be as simple as reducing the amount of time that the lights are in use or positioning the tank so that direct sunlight is limited. Blackwater extracts or wood (tannins) can help to darken the water and starve algae of the light needed for photosynthesis. Floating plants may help, however they will also reduce the amount of light that penetrates down to your plants.

5. Physical removal. Filamentous algae can be reduced by gently combing and winding the strands around a small brush (e.g. toothbrush). Ornaments/dÃ©cor can be lifted from the tank and brushed or soaked in bleach or potassium permanganate. Remember to thoroughly rinse the dÃ©cor to rid it of residual chemicals before returning it to the aquarium. Algae scrubbers are a cheap investment from the LFS.

6. Chemical control. A product called Health Guard (from Seachem) is excellent for controlling all algae, including blue-green algae. It is safe for all plants and fish. When all else fails, the addition of copper sulphate can be considered. A weak solution of copper sulphate (bringing the copper concentration up to around 0.3-0.5ppm) will kill algae but may kill some aquarium plants too. It must be measured exactly – overdosing will result in plant and fish deaths. This is truly an act of desperation and should not be considered lightly! When dosing is completed, be sure to replace the water and use activated charcoal in your filter to remove traces of copper.

7. Ultraviolet sterilisers. These lights are set up after the filter unit so that all water passes within a specific distance to kill any microscopic plant or animal life within the water. They are very expensive units to buy.

8. Other methods of control. Some others methods of algal control include: ozonization, reverse osmosis and resin exchange filters. Bottled or distilled water for water changes can help exclude the addition of tap water contaminants.

Extra Notes. Some methods of algae control also present a “clean-up” problem. If the dead algae collect on the substrate as sediment, the cycle of decomposing organic matter produces more nutrients for more algae. The addition of a coagulant or flocculent assists in the collection of this dying matter by causing the single-celled plant forms to clump together. They can then be netted with a fine skimmer net, vacuumed or filtered.

Don’t overfeed your aquarium. If a fish dies, remove it immediately. Both overfeeding and decaying fish add to the nutrient load in your aquarium.

Remember: Prevention is better than cure!