This is an Australian Shrimp 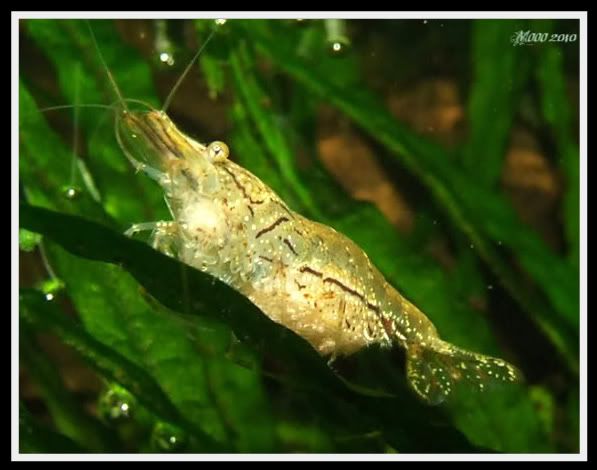 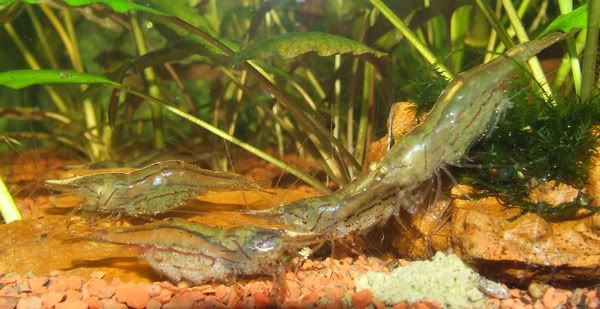 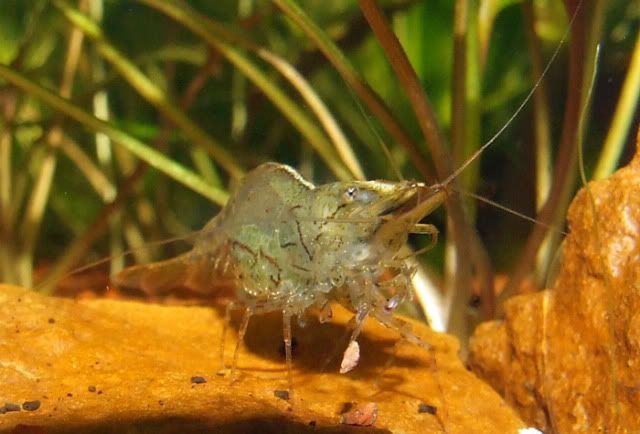 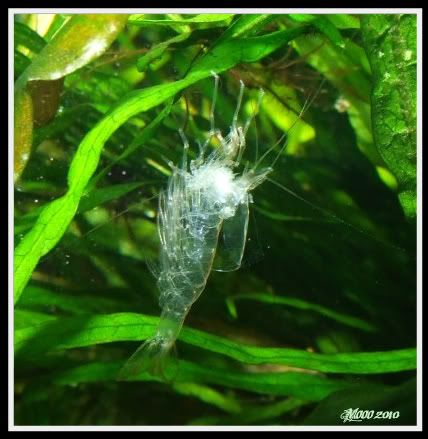 This undescribed species referred to as Caridina sp. ‘Ntnilotica’.

Max Size
It is the largest of the local atyids reaching almost 5 cm in length.

Location
This species is more abundant near the coastal creeks but is
found 90 km from the sea in the Roper River NT at Roper Bar.

Appearance
Males are smaller and less colourful than females which can be
reddish or dark green with a cream stripe running along their
back from the tip of the rostrum to then end of the tail.

Breeding
When a mature female moults she is surrounded by the smaller males
so I am assuming that this is when they mate. After mating the
females are laden with very small greyish eggs.
Unfortunately, initial attempts to raise these in fresh water were unsuccessful. When salt (half strength sea water), mangrove leaves, and local detritus from a small tidal creek were added, survival increased dramatically. After a few weeks, however, many tiny shrimp were
tearing around the top of the tub when they were transferred into fresh water.
Discussions with crustacean aquaculturists at Darwin
Aquaculture Center suggested the species may survive in fresh
water but the correct type of plankton for their first foods was
unavailable in fresh water.
Conclusion
In the natural habitat, these shrimps live with up to 45 fish species in
a very hostile environment. When placed in the planted aquarium they
will immediately seek refuge. After some adjustment, if there are not
too many bigger fish, they will be seen walking around on the substrate
and in the plants feeding. In the sparsely populated aquarium all but
the Darwin Algae Shrimp will breed. These are delightful little critters
for those aquarists who take pleasure from small things.

General Husbandry & Care
The diet is mostly detritus, algae, bacterial slimes and can be substituted
with plant based flake foods in captivity. The larger two
species are very good at hair algae removal, a trait that makes them
useful in the start up phase of a planted aquarium. Their water
quality requirements are not too stringent as they are found in a
wide variety of habitats, they will even suffer low dissolved oxygen
levels, (except the red nose variety) but will not tolerate copper,
chlorine or chloromine. It is a good practice to prepare water for
water changes in advance and store it for a week or more to be
certain all chlorine has gone. These shrimps are not suitable tank
mates with larger fish, and with smaller fish they need places where
they can hide or they will be targeted as food when they moult.

Additional information
They are great at cleaning a tank of algae of different types, particularly hair algae, the filament types are a thing of the past in my tanks....& they look darn good too...

Acknowledgements
Photo credits.. Michelle Nixon/Osborne
Karen Combes formerly of the NT Museum for help with identification,
Petshrimp.com forum for help with cultivation and identification,
The Technicians and Collections Manager at the NT Museum
for putting up with my constant questions and Dr Tim Page for
DNA sequencing and comparrison of the NT Shrimps against his
collection. The staff at DAC (Darwin Aquaculture Centre) deserve
special mention for ongoing help with my aquaculture projects
Last edited: Jul 26, 2015

fantastic job Moooo......wanted me wanting them which is always good! are they exported by any chance? Do you own any of them?

Excellent write up with great information.

respect and thanks
claire