Location: The red color is probably artificial, 'man-made'. That means that this species is (more than likely) not found in the wild.
It is not known where the original specimen were collected, and what species they were.

Water parameters: Temp 22-28cA tank with dimmed lights and a good amount of hiding places (plants, drift wood, rocks, artificial caves) is ideal for this catfish. A small tank is sufficient for a group of these fish: 24x12x12" (60x30x30cm.) is enough to house a single specimen, for a breeding group of 2-3 adults a 32x14" (80x35cm.) is better suitable.
Substrate should be sand or smoothened gravel: these fish love to burrow in the substrate, and sharp, jagged gravel can damage the mouth parts or the underside of the fish.
Typical for South American catfish, this species does best in soft, slightly acidic to neutral water, good oxygenation and a good amount of currents. It can however adapt to harder, more akaline water, and may even reproduce under these conditions.

Breeding Log: See post below. For adding comments and questions please use the original thread which is herehttp://www.plecoplanet.com/forum/showthread.php?t=6067

It's not fully clear whether this species is found in the wild, or that it is a fish 'engineered' by man.

I just spent ages pm'ing my breeding info on L10a so I thought it would be a good opportunity to expand on that and post it up in a breeding log.

Firstly this is the L10a red lizard whiptail. There is also a similar chocolate lizard whiptail which apart from color is really no different to the former. 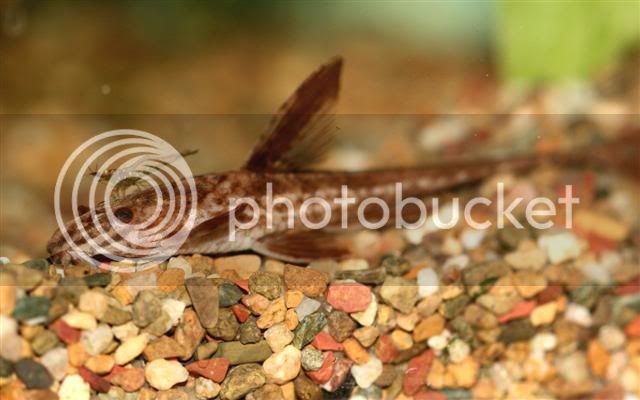 To breed you will require male and obviously female. By almost breeding time it will be pretty obvious by the big belly who the female is but most buy their stock way before then and here is how to tell the sexes.

Male is on the left, female on the right.

Firstly the male has a wider rounder snout whereas the female is finer and more pointed.

At maturity you will see a faint growth of odontodes near the gills on the male but honestly my eyesight wasn't really up to seeing it unless I used a macro zoom lens.

The male body is slimmer whereas the female has more curves and a fuller abdomen area.

Looking at the bottom fins to the anus, the male will show a bit of a V shape there and actually does have a tiny pointed breeding tube.
The female in contrast has a more rounded half moon shape there with a rounded knob breeding tube.

I keep my L10a red lizards and my royal whiptails in the same tank and apart from the L10a spawns in a log and the royals spawn up on glass, the keeping and care of them both seem to be much the same.

I have never really figured out if my L10a are more a veg eater or a meaty eater and put it down to, they like both in moderation.

I do know they are very nitrate sensitive and anything over about 10 is either going make them very sick or even kill them, so always keep those water changes up to scratch.

PH is always 7 and even sinking down to 6 sometimes due to the driftwood in my tank, temp usual 26C or so. Food is usually a Hikari algae wafer and Sera flora flake and cucumber every couple days. When I can I also grow a bit of algae outside in a container on a rock or stick and add that to the tank as a treat.

My tank is a 4ft x 15" x 15" with undergravel filter, canister filter a Jebao 1000lph and a power filter of an Otto 800lph. There are numerous pieces of wood and plants for the whiptails to hang out on.

Mine are spawning this time in a narrow 2cm wide piece of bamboo. It used to have a closed end till the L104 pleco ate it out but that doesn't seem to make any difference to the L10a because he still breeds in it anyway. 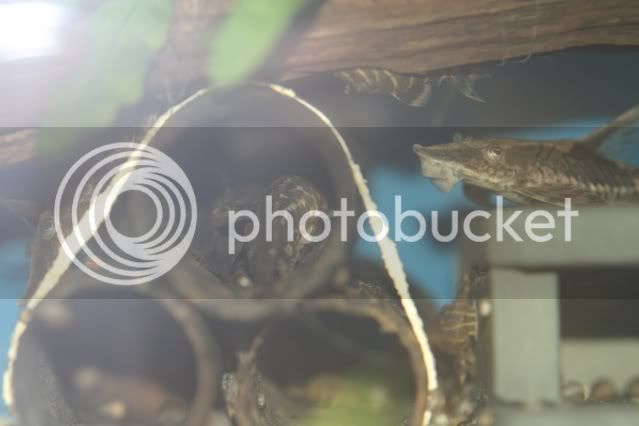 Both the male and female are laying in that photo with lots of stickybeaks hanging around.

Here are the eggs from an earlier spawn in a different log. 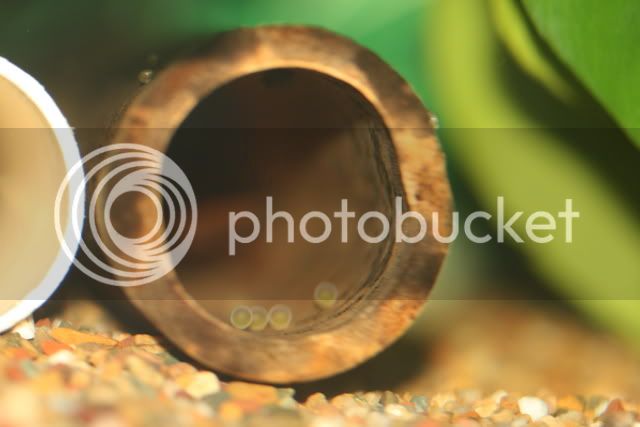 Being a log spawner they will have at least a dozen fry but no where near the 60+ the royal whiptail posts up on the glass during spawning.
The eggs take anywhere from 5 to 10 days to hatch depending on water conditions and I have never bothered stealing the eggs. I just let nature take its course until the fry appear.

I have quite high filtration and powerhead which is fine right up until the fry emerge. Then no matter how fine a sponge or wool you put over the filters, the tiny fry are going to get into it.

So as soon as I see fry, I get out my pippette with the end cut off so its a bit bigger and suck them out into a container. You can do it with airline tubing as well, just make sure its not into an empty container (have some water in first) as they are quite fragile.

They are also going to swim right thru the sponge end in the frysaver, so I get some synthetic material of continous curtaining and put that over the sponge to stop the fry getting out.

I use thefishcave frysaver as it has plenty of room and the saver lasts virtually forever. http://www.thefishcave.com.au 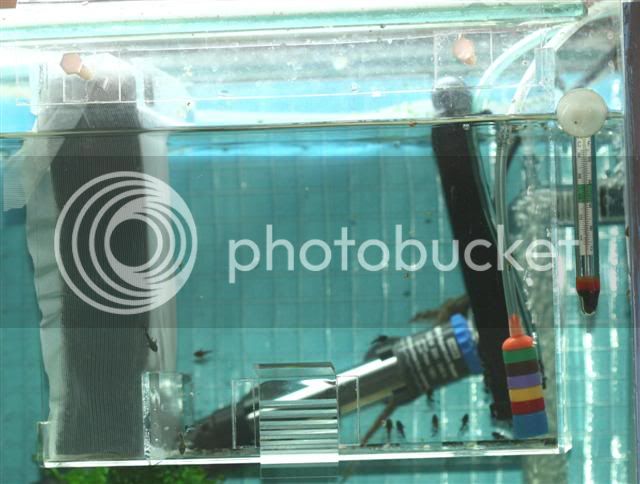 The airpump riser part is going to pull those fry straight up and back into the tank, so I turn it around the other way so it pumps water into the saver and the intake is on the tank side. 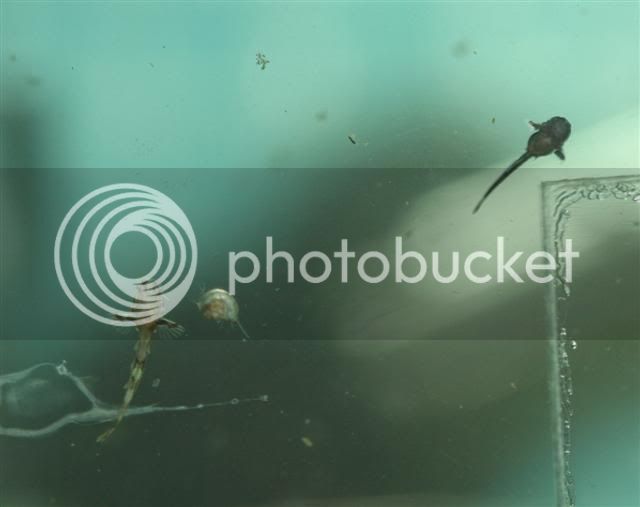 L10a fry on the left and royal whiptail on the right.

Back to the frysaver. You will have a film growing on the inside of the saver after a few days if its new. Get a pair of long tweezers and a tiny bit of filter wool and wipe that film off. When it settles, airline it out making sure you pippette any fry you also suck up back into the tank. That film is a major killer of fry so just be aware of it and clean it off if it gets too profuse. 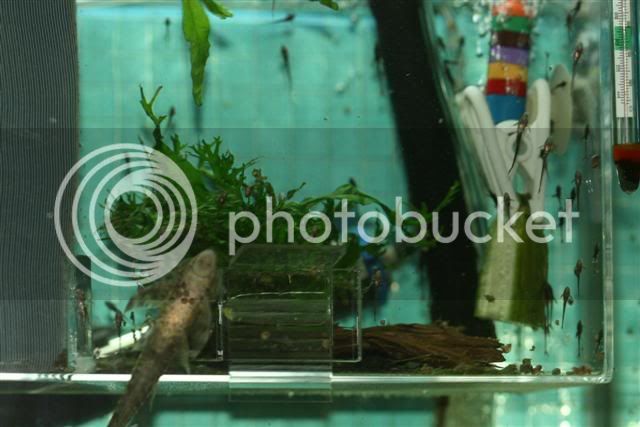 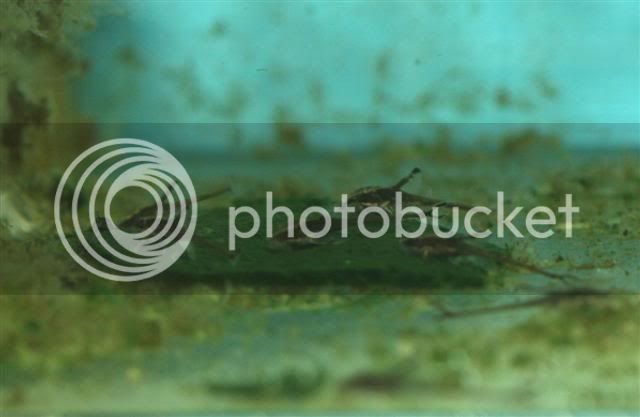 Lately I have found the easiest to be Sera micron food. Its pretty much almost talc and goes on the top of the water to sink down to the fry. After a couple of days I will add a little piece of cut cucumber which I put in the saver on a veggie clip. I leave it there a day or even two as the softer it gets the better they like it.

This time I had a little rock outside in water which had grown green stuff on it. The fry seem to love it.

I also have microworm but the fry sorta have to grow a little to even be big enough to eat them so thats something for a couple weeks old onwards.

The finished product. A lovely little L10a released into the main tank at an appopriate size so he won't get sucked into the canister intake. 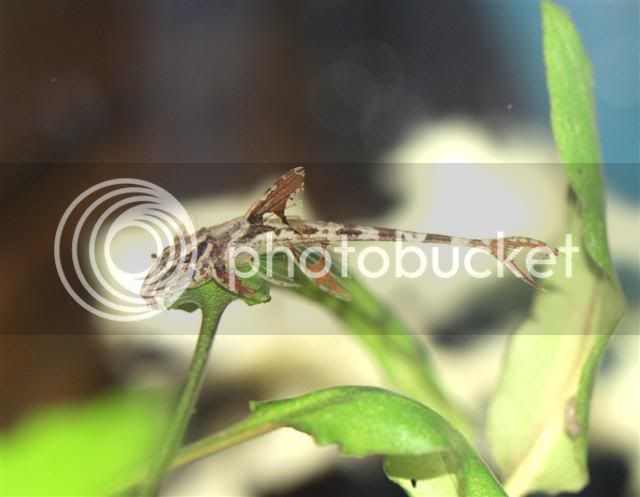