Compatibility: Peaceful and unproblematic fish, suitable for community tanks and show tanks with easy to stress fish like Discus or Angel Fish, as well as other bottom-dwelling fish. May become a bit pushy during feeding time, or if not enough hiding places are offered, but if the tank is properly aqua-scaped it is not aggressive, even towards its own kind.

Sexing and Breeding: The male has a larger head and much more odontode growth on the body and pectoral fin ray.

Diet: This is a wood-eating catfish, like all species from the genus Panaque (including those known to some as Panaqolus) and Cochliodon. Therefore, a good supply of bog wood is necessary in the tank: not only does this fish extracts certain elements and nutrients from the organic layer which forms on the wood over time (also known as "Aufwuchs"), it actually eats the wood itself, possibly for digestive reasons. As wood does is not very rich in nutrients, it means the L397 consumes vast amounts of it, and produces an almost equal amount of waste (because of which a very strong filtration system is an absolute necessity).
Besides wood, the diet can be supplemented with vegetable matter (cucumber, lettuce, egg plant/aubergine, zucchini/courgette, etc. as well as algae and catfish pellets)

Water parameters: Temp 25-29 PH 5.5-7.5
This small catfish-species prefers a dimly lit tank with a good number of hiding places, either created with plants, drift wood, rocks or artificial (pleco spawning) caves. To keep more than one specimen in the same tank, or together with other bottom dwelling fish, you need at least a 40x16" (100x40cm.) tank: this fish can be quite territorial, and when suitable hiding places are lacking, it can be aggressive towards other bottom dwellers. When kept as only catfish in an aquarium, a tank size of 32x14" (80x35cm.) is sufficient.
Typical for South American catfish, this species does best in soft, slightly acidic to neutral water, good oxygenation and a good amount of currents. It can however adapt to harder, more alkaline water, but whether it will reproduce under such conditions is questionable.

Breeding Log: See post below. For all comments please use original thread here Keeping and breeding the L397

I set them up in a 3ft tank with part glass bottom and part gravel, driftwood with anubias and caves. There was an Otto 2400Lph canister, Eheim pickup power filter, and air sponge filter. Temp was set on 26-28C (around 80F) and pH around 7.2 as that is my town water pH.
I had planned this tank well and had been especially cycling it for a month prior to getting my first L's. It was the start of my pleco love affair which has lasted now for years.

They were just breathtaking, so pretty, and not that shy as far as plecos go either. Apart from wood, I fed them Hikari algae wafers, Sera Flora flake and cucumber. 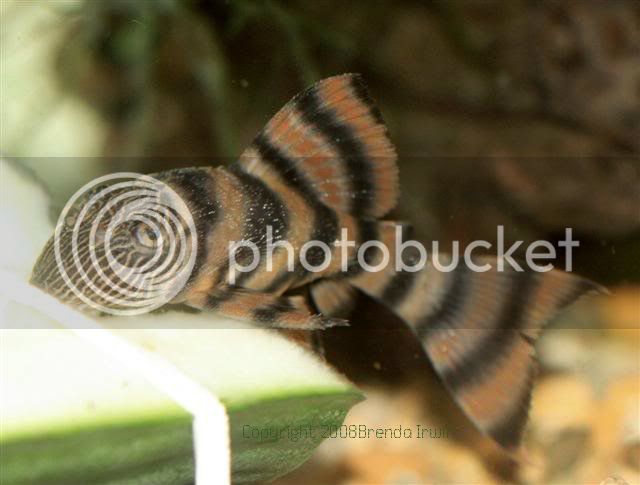 Look at that cheeky little face. 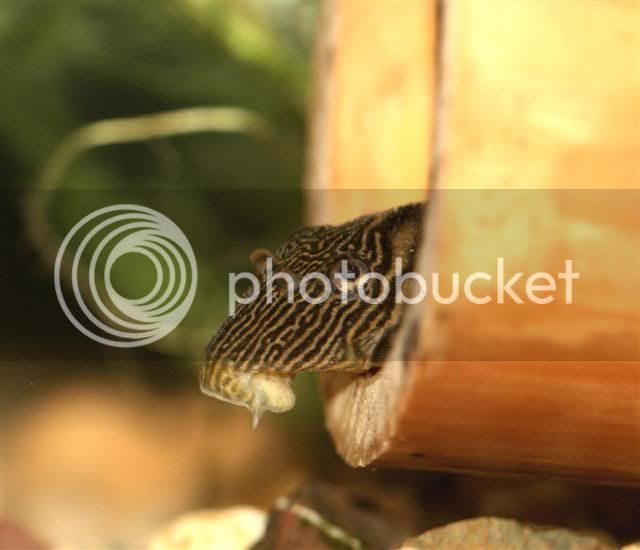 By January 2009 just after their estimated first birthday they were 7-8cm and looking fairly sexable. I had 3males and 3 females. They were still as attractive as ever. This is a female. 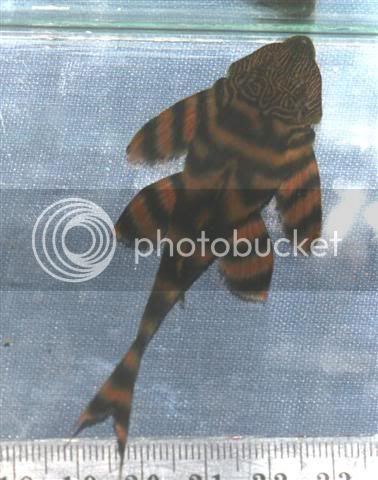 The males tend to have longer side whiskers over the gills, hairy pec fins and later when more mature, their whole solid tail area becomes hairy and raspy to feel.

I set them up in a 4ft x 12" x 18" tank with their old Otto 2400lph filter and power head. I also at this time set up an under gravel filter for extra filtration and air. With the gravel also being a filtration media I figured when and if they bred I would need all the good bacteria I could get with fry being born. It would mean I would not have to move the fry too early in life and they could be raised until quite large 3cm in the fry saver before they needed to go to their own grow out tank.

With the increased size of the L397 originals also came bigger waste so I also added a second power filter in the opposite end of the tank and blowing the debris to the canister intake. Each male had his own cave spaced a foot away from the next cave plus a few spares which the females would sometimes camp in when they weren't off chewing on driftwood.
Here is an exert from another forum of my fry success as I lost the information from pleco fanatics when the site went down.

Fri Sep 11, 2009
Miracle L397 fry
I call it a miracle because I didn't know I even had eggs! I had gotten lazy and let nitrates rise to 10 for 3 days before I did a water change. I turned the heater down to trigger spawning for a whole day, not knowing the deed had already been done.
I did a 30% water change with gravel vac and fortunately didn't kill the one fry kicked out of the cave with fright.
I couldn't find a fry saver to fit under the limited access of a bottom tier tank so I used a net saver and popped the whole cave, dad, fry and all into the net but the cave pulled the frame apart so I had to prop D caves up under it to hold it together. I made a custom fry saver to fit the fry but silicon needs time to cure. That was yesterday.

Tonight I checked nitrates and they were still up on the 10 mark so I thought I would do a little water change with stored, warmed and aerated water. I looked at the net saver and the frame is nearly torn adrift again. There is a L397 whizzing around the net saver instead of sitting in the cave tending the fry and there seems quite a lot of poop in the net.
Ok, drastic action. I rinsed the (touch wood) hopefully ready custom fry saver and got it ready. Took out the L397 and put it back into the tank. Took the cave out of the net saver and opened it to put any fry gently into a container and then to pour them into the new fry saver. Whoa there!

So dad got put into the tank as well, and the fry into a container. There were 16 of the cutest little things you've ever seen.
Couldn't resist a few baby photos before I added the fry to the new fry saver.
Dad has his cave back so he can woo the girl again. Hopefully all goes well but gee I seem to have done everything wrong so far lol. 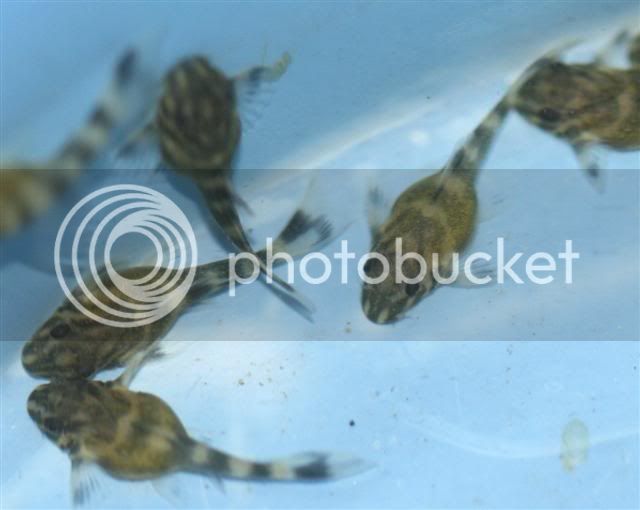 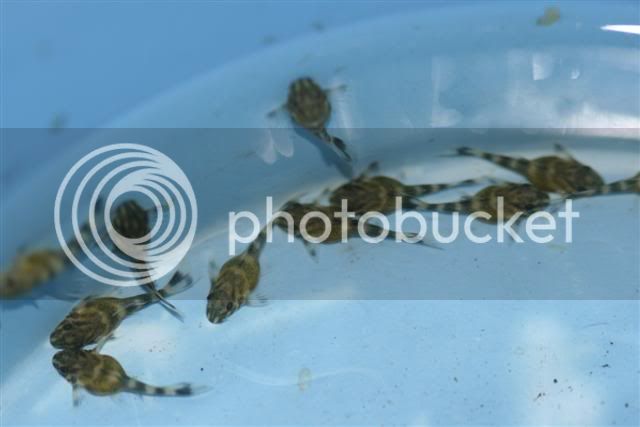 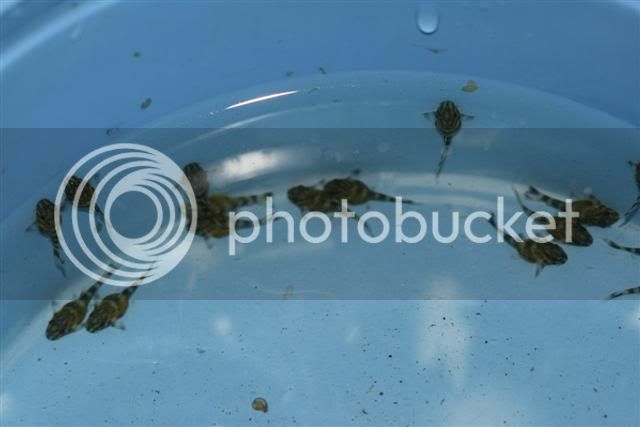 So there you have it. They had bred at approximately 20months of age and done it before any temp or water changes I had made.
I should add, I had changed from town water of pH 7.2 to rainwater for a little while prior to then which was in the low pH range of 6 so that may have contributed also to their breeding.

I lost quite a few fry in those earlier days of breeding, either because the first couple of spawns were weak or likely I got overzealous with the feeding of them.
I have figured out it is a good thing to always leave a couple of fry from earlier spawns in the fry saver as they seem to show the new fry how to eat wood, cucumber, Hikari algae wafers and Sera Flora flake properly. Only when fry are almost 3cm do they score something a little meatier like Sera Vilforma and even then its only one tab to several dozen. When fry are present with traces of egg sacs still attached, I feed very sparingly to the saver and withhold even the Hikari algae wafers for a few days until everyone is eating the cucumber, wood and flake properly.
I now use a fry saver from "thefishcave" which has a full sponge at one end and an air pump pumping debris out of the fry saver into the main tank. I also have a small air stone and a tiny 4watt power filter which I rinse in the old water every week during water changes. Only when the fry are nearing 3cm do I move them to a grow out tank of their own. This means at times I have had over 100 fry on one 9" x 6" x 8" fry saver so you can see why the extra air stone and power filter comes in handy. 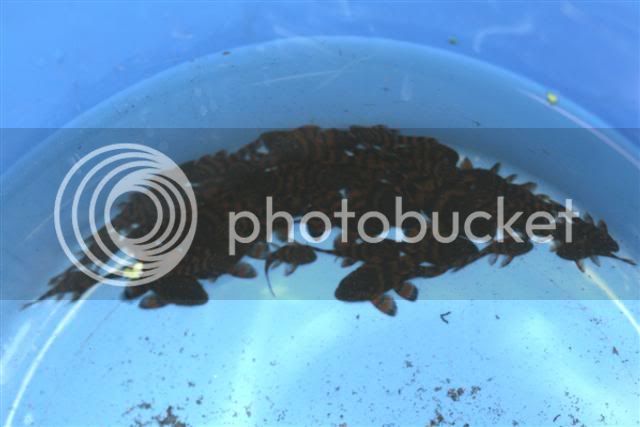 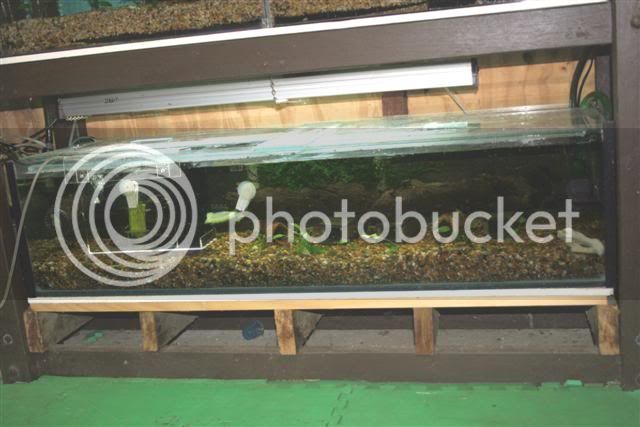 I sold off one pair of the L397 as I just couldn't cope with so many fry and one male was having 2 girls spawning in his cave so he never really got a rest from breeding.
The tank is elevated a bit to make it easier to siphon water out and gravel vac.
It a darkish dingy bottom tank which seldom has the light on and instead has diffused light from the overhead room lights.

I always fry save the fry and do not allow fry all over the parent tank as it disrupts the parents breeding when I need to take fry out to the grow out tank. I have also found I have more losses with fry loose in the main tank as opposed to the fry saver where nowadays I seldom have any fry losses.
On occasion I have made a booboo when to take the fry from the logs and the male has a clutch of eggs as well as fry ready to be taken to the fry saver. Now I just stick the eggs back in the log and the male and he accepts them and continues his fanning but on one occasion I took the eggs and artificially hatched them on another tank using an egg tumbler. Basically its sort of a specimen jar with an air stone in the top to draw water up past the eggs to keep them clean and aerated.
After 5 to 10 days (forget which) the eggs hatch but the fry still carry a large egg sac and cannot free swim about yet. They will not eat while they carry the egg sac.
Fry day 1. 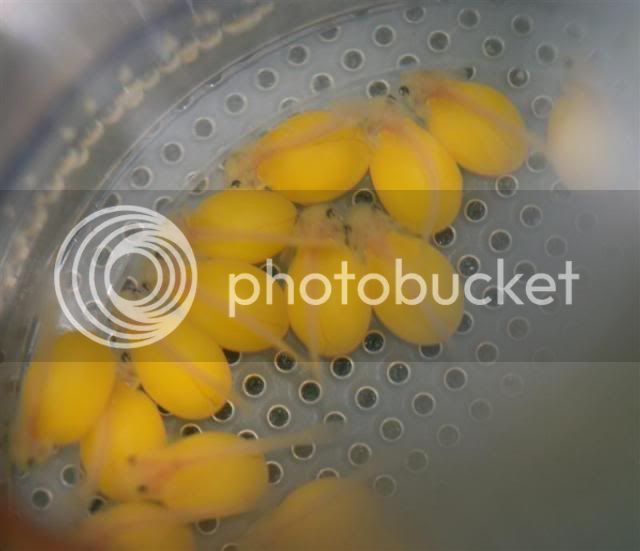 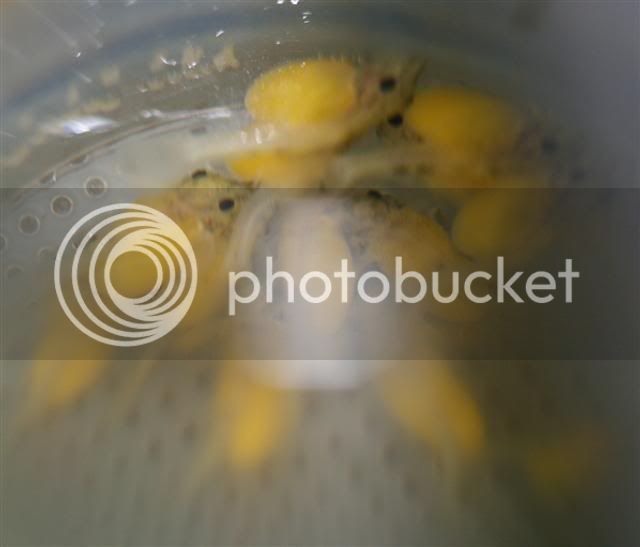 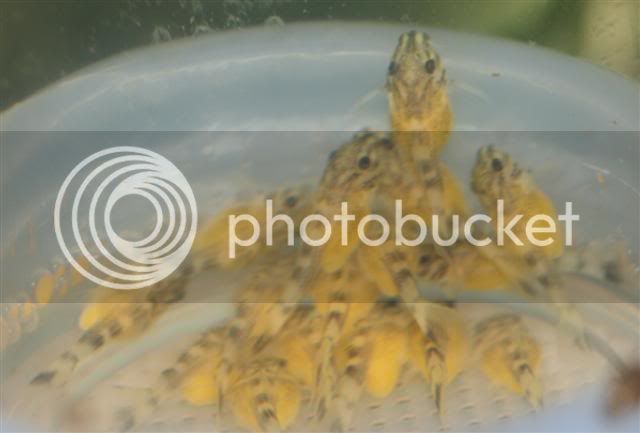 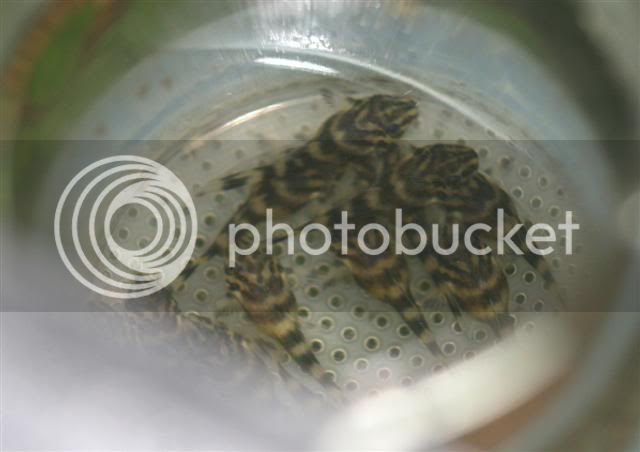 By day 8 the egg sac is absorbed and the hungry little fry are ready to eat. 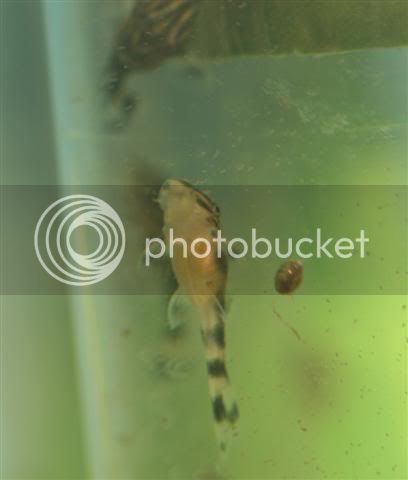 Hairy tail male in log with female waiting to be let in to breed. 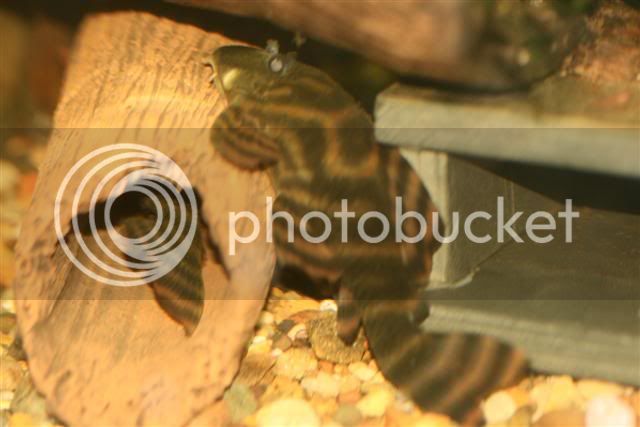 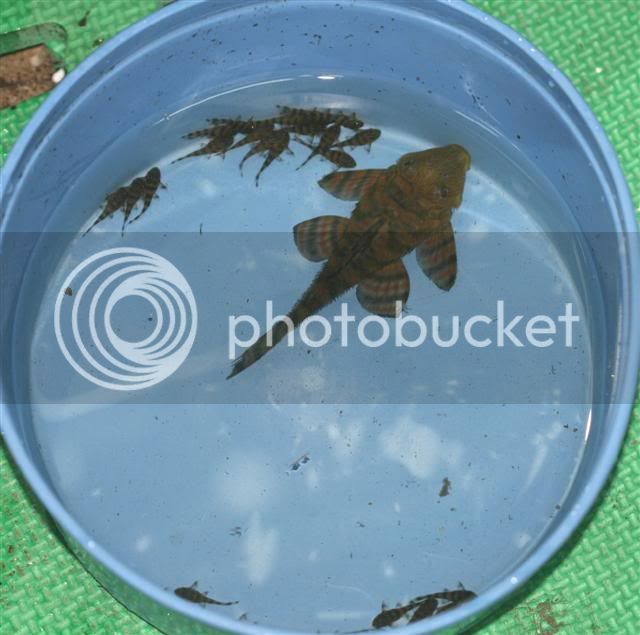 Fry in grow out tank turning my wood into Swiss cheese. 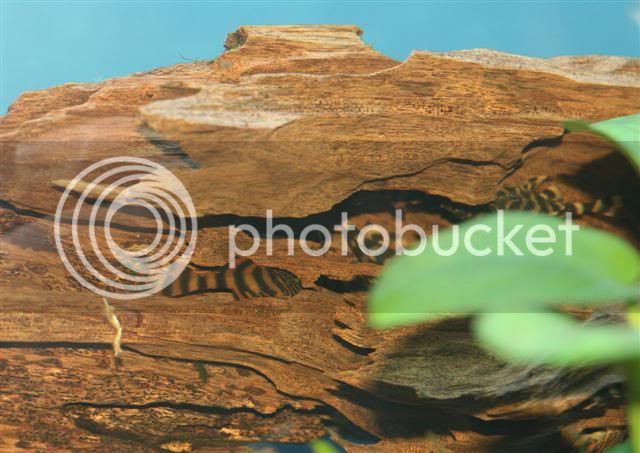 Fry at 4 to 6mths ready to be loved in their new homes. 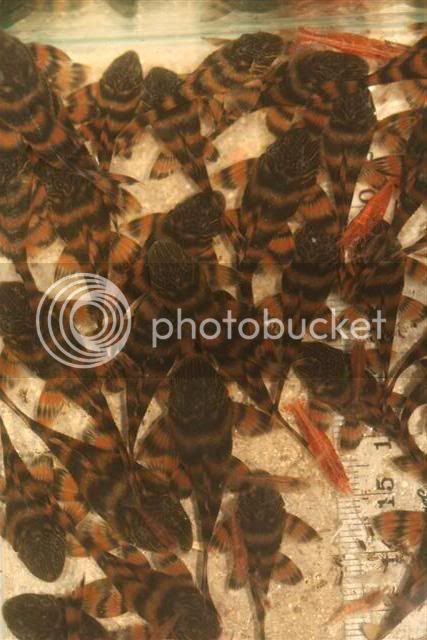