Compatibility: The Clown pleco is a relatively shy and peaceful fish, although it can be a bit pushy during feeding time. Also, like most Loricarids, it's a territorial animal - this means that in order to keep more than one specimen in the same tank, it needs to be spaceous (approx. 60 liters/15 gallons per fish) set up with numberous hiding places.
Like all members from its genus, Panaqolus maccus requires drift wood in its tank, because it's a wood-eating species.

Sexing and Breeding: Mature, breedable males have quite a lot of odontode growth on the body and pectoral fin ray

Diet: This is a wood-eating catfish, like all species from the genus Panaque (including those known to some as Panaqolus). Therefore, a good supply of bog wood is necessary in the tank: not only does this fish extracts certain elements and nutrients from the organic layer which forms on the wood over time (also known as "Aufwuchs"), it actually eats the wood itself, possibly for digestive reasons. As wood does is not very rich in nutrients, it means the Clown Pleco consumes vast amounts of it, and produces an almost equal amount of waste (because of which a very strong filtration system is an absolute necessity).
Besides wood, the diet can be supplemented with vegetable matter (cucumber, salad, aubergine, etc. as well as algae and catfish pellets) and meaty foods like shrimp and pieces of fish fillet.

Water parameters: Temp 22-30 PH 5.5-7.5This small Loricarid prefers a dimly lit tank with a good number of hiding places, either created with plants, drift wood, rocks or artificial (pleco spawning) caves. To keep more than one specimen in the same tank, or together with other bottom dwelling fish, you need at least a 32x16" (80x40cm.) tank: this fish can be quite territorial, and when suitable hiding places are lacking, it can be aggressive towards other bottom dwellers. When kept as only catfish in an aquarium, a tank size of 60x12" (60x30cm.) is sufficient.
Typical for South American catfish, this species does best in soft, slightly acidic to neutral water, good oxygenation and a good amount of currents. It can however adapt to harder, more akaline water, but wheter it will reproduce under such conditions is questionable.

I bought my L104 pair as adults a year and one week ago. 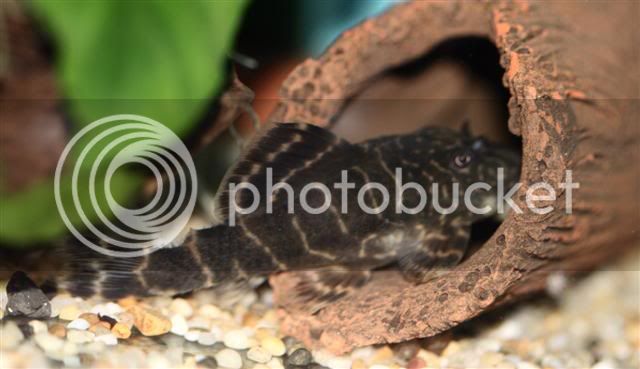 Since I have mostly all 4ft long tanks, I added the pair to the established Royal Whiptail tank.
It has a mix of Coffs gravel, calcium carb and a small amount of crushed coral.

A few months ago I decided to put in an under gravel filter on the 4ft x 1ft x 18" tank and it has 4 air risers.
On the one corner instead of using a riser I connected a canister intake.
My idea is, it takes surface debris from the top of the gravel and also pulls out bulk mulm from under the UGF.
I do still gravel vac parts of the tank, just not quite as often. 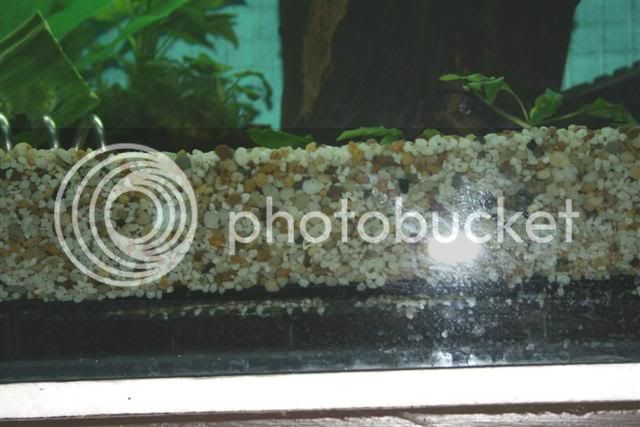 The canister is a Jebo, nothing special but it does 1000Lph (219 UK or 264 gal).
The spray bar is only small but quite powerful.
There is also an Otto internal power filter blowing current up to the further end and pulling debris back toward the canister intake.
I like the Otto style as I can see thru the filter cups and know when to give them a rinse in the old water change water.
The cups are interchangeable; if I want to seed a new tank I steal one of the seasoned cups off the filter and give it to the new tank filter. 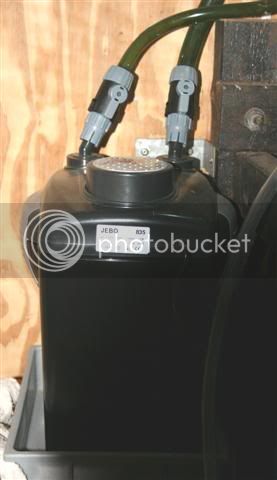 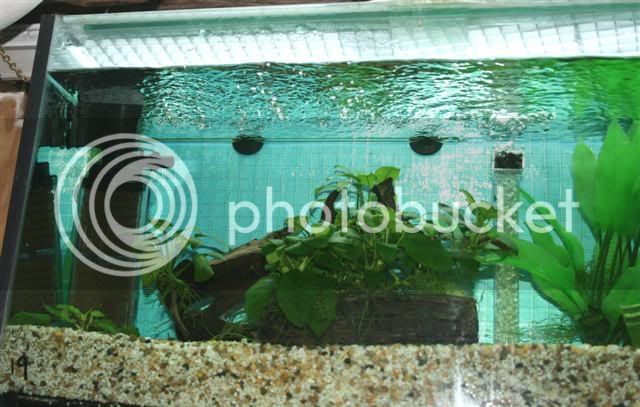 My water is rainwater with a ph of about 6 to 6.4.
The calc carb can pull it up to about 7 but not much higher as the driftwood (an important part of the L104â€™s diet) does pull ph down a little.
I do about 20% water changes once a week.

Temperature is set on 24C for a winter level but its not really working at the moment as sometimes in summer its getting up near 30C (86F).
I have put in an evaporative cooler to blow on the tank and it tends to keep the water around 26 to 28C (79F-82F).
I have replaced the glass lids during summer with some light weight egg crate mesh so the fan can cool the water surface.

I don't know if itâ€™s significant or not but the tank is in my laundry which I seldom visit unless washing or tending fish, so largely they are undisturbed.
I keep the tank light off during the day in summer so as not to heat the water with the lights.
I only put the light on for a few hours at night to tend tanks and let the plants (anubias on driftwood, java fern and a few crypts) get a bit of light.

Food is continental cucumber every second day, couple of Hikari algae wafers to feed 10 royal whips and the pair of L104's.
I also add a good sprinkling of Sera flora flake daily.
Not often but sometimes a bit of New Life Spectrum or shrimp pellets might be added and maybe even a tab of Sera Vilforma.
I do know royal whips and I imagine the L104â€™s love live black worm but its hard to get here.
I always worry I might bloat something so they don't get it.

The preferred caves are those round terracotta log looking ones with an opening of about 2.5cm or about an inch.
The L104â€™s did used to have a D shaped cave and I thought once they had actually spawned some eggs.
It turned out to be a false alarm and a piece of coral had been kicked in the cave. 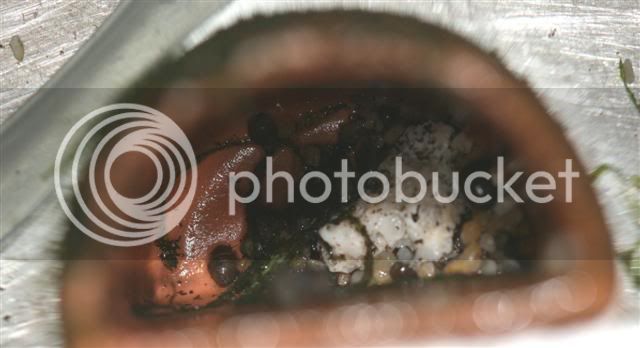 Todayâ€™s caves. Sometimes they can be a little sharp so I smoothed off the insides and front openings with a rat tailed file. 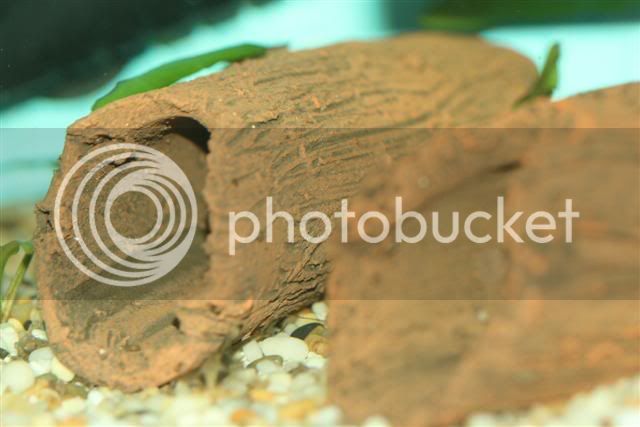 Prior to now, they have trapped together in the log for over a week sometimes but nothing ever came of it.
I gave up looking, but just noted that the female went in the log from time to time.

Recently the royal whiptails had a double spawn so I am not sure if that maybe put something in the water to trigger off the L104's to breed.
I have a large fry saver up one end now full of whiptail fry and some peppermint fry which I hatched in an egg tumbler in that tank.
Full tank photo: (the lovely big leaved plant in the middle is a fake one) 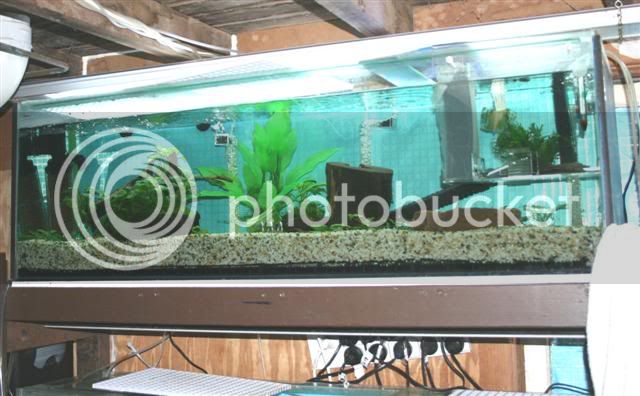 There has been very little rain or storm activity lately.
The barometer did drop a bit about a week ago so perhaps that together with their usual rainwater change also got the L104 in a breeding mood.

It was only when I noticed one fry kicked out the other night that I decided to empty the log to find 8 more fry. It was a fantastic surprise. 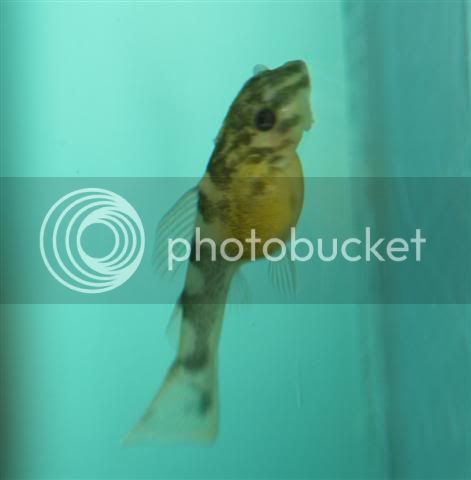 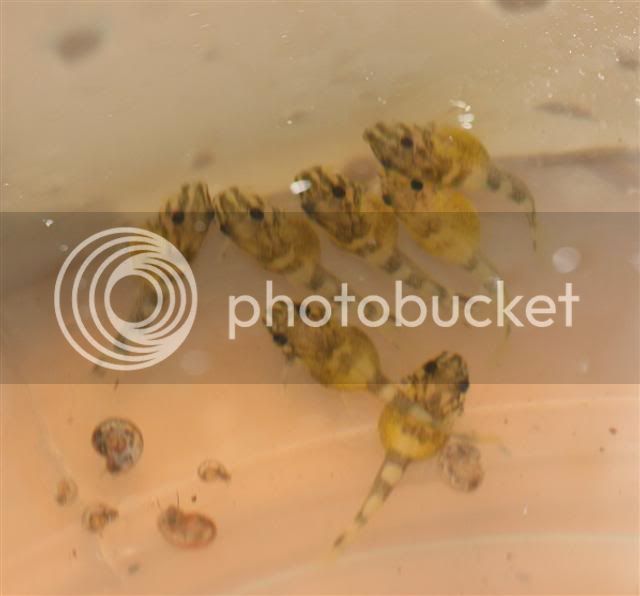 A few days old and the egg sacs are starting to disappear. 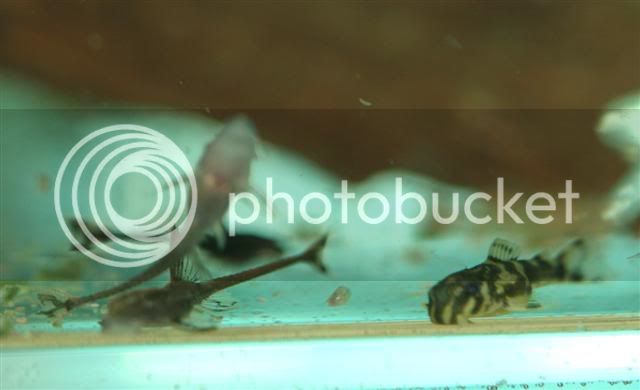 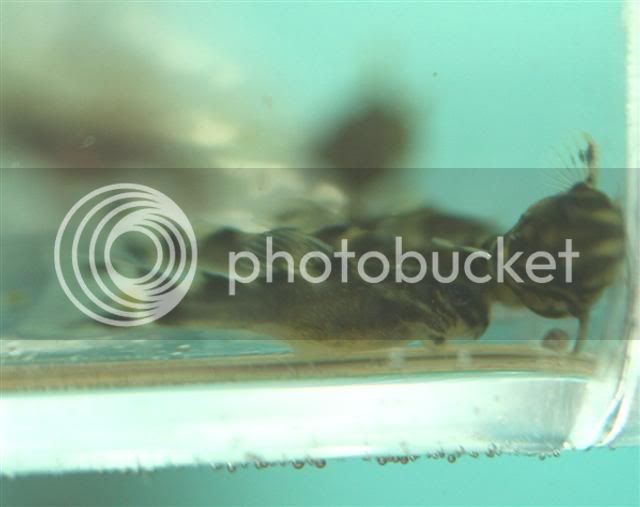 The fry are kept in the frysaver with royal whiptail fry, red lizard L10a fry, and peppermint fry.
Fortunately at this age they all seem to eat similar foods.
The plant in the fry saver is a little Windelov java fern tied to a little bit of driftwood.
Donâ€™t throw out the little driftwood â€˜bitsâ€™; they come in handy for fry savers.

I feed a spirulina power and agar agar mix, cucumber, Sera Flora flake and Sera Vilforma tabs.
I am not sure how the L104 fry will go when they start eating the Vilforma.
If bloating occurs I will substitute it with crumbled Hikari algae wafers.