First signs of illness were small 2-3cm circular/spherical white/whitish-pink lesions on the body of said species. Lesions spread quickly; areas including the mouth, stomach, sides and snout were affected. Eyes became sunken and secondary infections resulted. Initial treatment consisted of a Â½ dose of Quickcure for two days. The disease continued to spread throughout these two days with no reactions to the medication. Lighting was cut as well as a 10 degree drop in temperature applied (from 80 degrees Fahrenheit to 70 degrees Fahrenheit). The potential pathogen(s) responsible for the disease referred to here as “Panaque Plague” lives in two types of water conditions. One being either cool temperatures (70 degrees Fahrenheit and below, and the other being warm temperatures (above 70 degrees Fahrenheit). One key method to treatment is to switch the temperature from the initial time of outbreak to either a rise in temperature or reduction in temperature. Next remove all decorations, plants, inverts, and un-affected fish including any Panaques that did not obtain the disease. During my experience with this, I left one piece of wood to ease stress to the affected Panaques. Any fish that were not affected were moved to healthy tanks that did NOT contain any species of Panaque. Another method would be to move any healthy fish to a “Hospital Tank” for further observation. However, note that this disease has a high mortality rate and can completely wipe out all diseased fish within 48 hours.

*One species known to be very susceptible to this disease is Panaque sp. (L191). Species not of the genus Panaque have not been known to be affected by this disease. However, a similar pathogen(s) has been recorded to affect Carp. 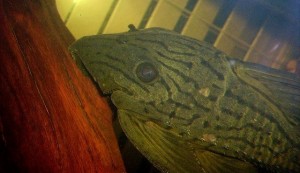 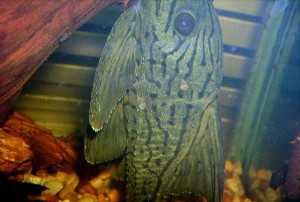 
After day two of infection, 75% of water was replaced with RO water to remove remaining Quickcure from the water. A new medication was applied to the infected tank, Aquarisol (Copper sulfate) for the remainder of the treatment along with 2 tablespoons of aquarium salt applied every other day (note this amount was used in a 60 gallon aquarium). 50% water changes were done every other day, lights remained cut and a sheet was draped over the tank to reduce any sunlight as well as to reduce stress.
Progress was checked daily, as well as continued treatment and water changes. After the initial dose of Aquarisol (Â½ dose) there was an immediate halt in the progress of the disease. The following three days Â½ doses were continued to be applied, 50% water treatments were done throughout entire treatment. After 3 days, treatment was increased to the full recommended dosage and remained this way for the duration of the treatment.

*Note that during any time of outbreak containing Panaque Plague to use separate equipment in the infected tank, including nets, vacuums, containers, etc. Disinfection of items will be included later.

The above method was continued for a period of roughly four weeks. As each week passed noticeable changes could be seen in the affected Panaques. The lesions soon grew smaller, sunken eyes were returning to their previous state, and secondary infections were clearing. During entire outbreak all Panaques affect continued to consume food on a regular basis (please note that this may not always be the case, and that some species will stop consumption of food completely during infection). If a Panaque does stop consuming food during infection try offering foods enhanced with garlic or garlic extracts (you can soak fresh foods in garlic juice for 10-15 minutes if you can’t find any pre-made foods). 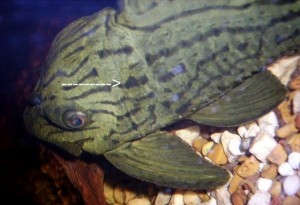 *Note the lesions are now gone and new flesh has formed. Picture is of same specimen in above photos.
​

After approximately 5 weeks from outbreak all former inhabitants of the tank were re-introduced, as well as all items after disinfection. No fish were lost during this outbreak and the above is the first recorded successful treatment and documentation of the Panaque Plague.

First signs of illness were two small 2-3cm circular lesions on body and sunken eyes. Once illness was confirmed as Panaque Plague treatment began with Copper Sulfate (Coppersafe by Mardel) at full recommended dose. All other inhabitants were removed as well as all items excluding one individual piece of driftwood. Treatment lasted for 3 weeks with a 25% water change done every week. Lighting was halted from use and a sheet was draped over the tank to reduce sunlight exposure.
After 2 weeks signs of illness were noticeably gone and healing of lesions were underway. All inhabitants and disinfected items were returned after 4 weeks from initial outbreak.
(Separate nets, containers, vacuums, and any other materials were used during outbreak. All items were disinfected afterwards.)

• When ALL noticeable signs of illness have been gone for at least two weeks (this is a personal timeline but highly recommended)
• When ALL dÃ©cor, wood, plants, filters, etc. have been disinfected properly
• Make sure you’re comfortable with re-introducing fish; the behavior of your fish can tell you much more than any book or article. Are they eating consistently, are they breathing normally, are they resuming normal activities before outbreak? These are all good questions to ask yourself before you re-introduce your fish
• Be patient; don’t re-introduce fish before ALL signs of disease are gone. Be safe, be thorough, be cautious


Disinfection of Equipment
This details disinfection of equipment ONLY. Vegetation and driftwood will be covered in the next section.
Mix the following in a bucket or container:
10% Unscented Bleach
90% Tap water
Allow to sit for 24-48 hours then rinse equipment thoroughly (you can add de-chlorinator to the mixture to help bind the bleach).

Disinfection of Vegetation and Woods
For vegetation you can use the same mixture above but ONLY dip the vegetation, do not let it soak, and rinse thoroughly. Wood can be disinfected using either of the following methods.

Method 1: Soak wood in Hydrogen peroxide for 24 hours. Rinse thoroughly.
Method 2: This method is better suited for larger pieces of wood. Allow wood to dry completely outside for at least 2 weeks (you can place wood in a plastic bag if you are concerned about bugs or outside contamination). Rinse thoroughly before returning to tank.


In conclusion, Panaque Plague a terrible disease that any Panaque enthusiast should be prepared for. Check your fish daily, maintain safe and adequate water conditions, and reduce stressors as much as possible. Water maintenance is of the utmost importance as well as keeping your filters clean and running smoothly.
Treatment with Copper Sulfate has proven both safe and effective when battling Panaque Plague. Always follow recommended dosages. If you keep a supply of Copper Sulfate based medication on hand make sure it is not out of date upon use and stored in a cool, dry place.
Panaque Plague can be cured, but remember that you are a big part of the process. REDUCE stress by turning off lights and reducing sunlight exposure. ALWAYS use separate materials in affected tank. DISINFECT all materials and equipment before returning them to a healthy tank. It IS possible, and can be successfully cured.

Great Article, Hopefully I'll never have to deal with it but if I do, I'll be ready for it.

Very good information, thanks for the interesting read
G

Congrats on a great article KF, hope this will save many royals...

Thanks Lisa for the link