I am no expert but I have used RO water for a few years now. Once you get it right for me it is the Key to keeping and breeding fish.
Please when reading this understands I have no trained or scientific background with regards to water chemistry.

Let us look at water as a media were the fish live. The difference in water from any part of the world will be quite vast when compared with tap water.
The fish keeper that wants to control the water has 3 choices, tamper with tap water or rain water or use pre treated water.

Water from a tap is what most people start with I for reasons that I will not muddy the waters with (No Pun) will not use rain water.
Once you have run water from the tap through the R O Unit you have almost pure H2o all of the suspended matter is removed along with most of the chemicals, heavy metals and silicates.
The water to all intents is pure.
A quick over view of how this works, most RO units are what is called 3 stage units this is a pod containing a pre filter normally polycarbonate or wound string this will be rated in Microns so a 50 micron pre filter will stop very item of solid matter over 50 microns a 25 micron pre filter will stop any item of solid matter over 50 microns and so on.

The next pod will be a carbon block this removes smells and some tastes the final stage of this process is the membrane its self a tightly wound sheet of a form of special material that the water is forced over now over is the key word not through but over, as the water is under pressure some water will cross over through the membrane, the rest is rejected. The pollutants are trapped in the membrane so the waters total pollutants are not increased an important point. Now some people call this rejected water waste of contaminated water it is not it is just rejected and the amount of rejected water is controlled by several factors, the main one is water pressure the higher the pressure or PSI (pounds Per Square inch) the greater the water forced through the membrane as the water passes over the membrane. In theory you should be able to reach a point were you have no rejected water by increasing the pressure.
You will have two pipes coming out of the unit one will be product water one will be rejected water. The rejected water is normally run of to a drain.
RO units are rated in GPD (Gallons Per Day)
The rated value is some thing you will never get under mains pressure ie around 1 to 2 PSI in the UK. A booster pump is a good idea but this again I will not cover due to tec over load syndrome.


Now you have solved several problems but created a massive problem. Mainly nothing can live in it. This is for quite a lot of reasons but letâ€™s not go over them here
The main reason why this new water is totally useless to us as fish keepers is that it contains no or very little Kh, it is unstable, its PH and other things are dependant on its environment so the PH will swing all over the place.
It is also dangerous because you have striped the chloride and other disinfectants from it, bacteria will now breed in this water if it should get in and find food and believe me it will.
So letâ€™s look at the first problem the Kh how can we deal with this?
Most fish keepers will use powder or liquids to re mineralise. This is perfectly acceptable and works for most people it just replaces the items removed with a controlled amount of chemical salts that are safe.
The other main way to alter the water is to add water to it, this may sound crazy you first remove pollutants then you add water with the same pollutants in it?
It is not as mad as it seems, the water you add with contain what is removed sure but once mixed it will be diluted. It is like removing a small percentage of the pollutants. Some people add the rejected water from the RO unit. Not so crazy as the water rejected is about as pure as most domestic carbon only filters produce.
I use a second form of water treatment a HMA unit or CBR filter lets not go over that in detail but just say its filtering less material out and in a different way, this water is mixed with the RO I use a needle valve you can just mix it in a tub and stir it all up then take a TDS reading and use it once its right.
The second problem of bacteria is quite easy to cure just use it as you produce it and donâ€™t store it for a long time.
I use about 12 gallons a day my system takes around 12 hours to produce this amount so the water is not standing about all week.

some information on common expressions

TDS is totally dissolved Solids it is connected with conductivity.

Most TDS meters will measure conductivity

Can we see some images of your RO / HMA setup.
M

It will just look like a tangle of pipes sadly but next time I am in the fish house a photo will be snaped.
The geeman did a nice diagram of how it works

macvsog23 said:
It will just look like a tangle of pipes sadly but next time I am in the fish house a photo will be snaped.
The geeman did a nice diagram of how it works

Zebra Pleco said:
Can we see some images of your RO / HMA setup.
Click to expand...

You asked for it
Do not ask me to explain it or the way I set it up. 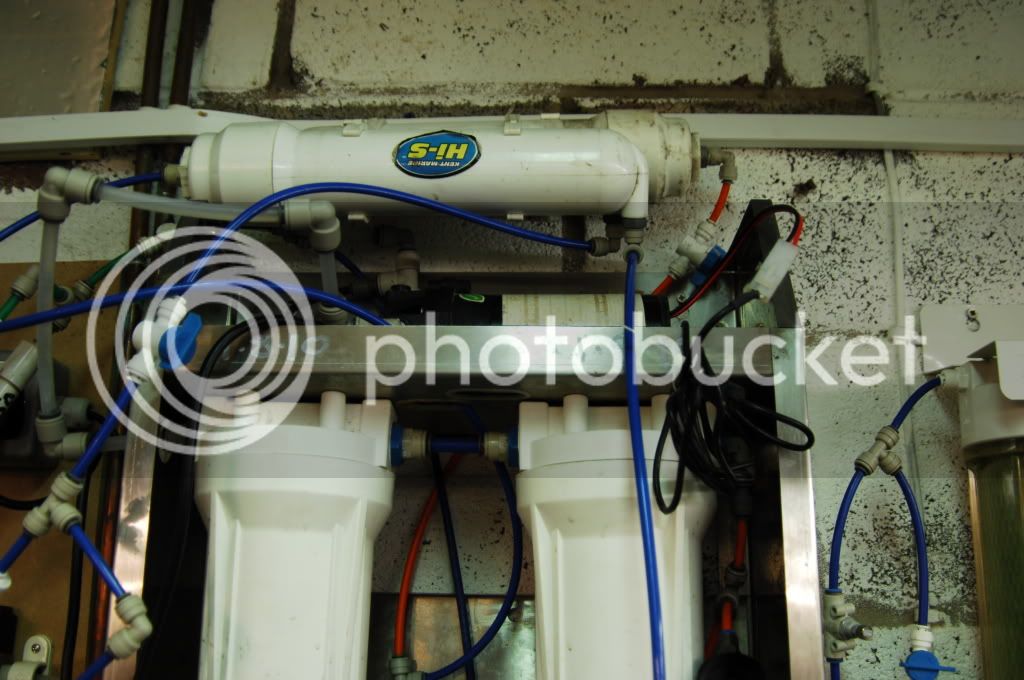 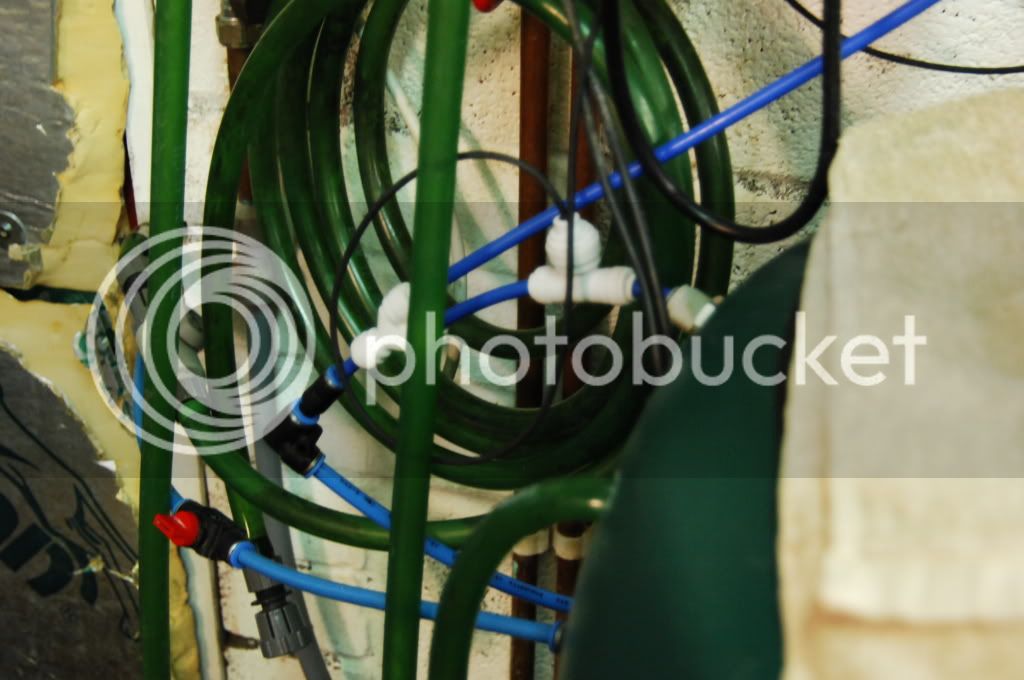 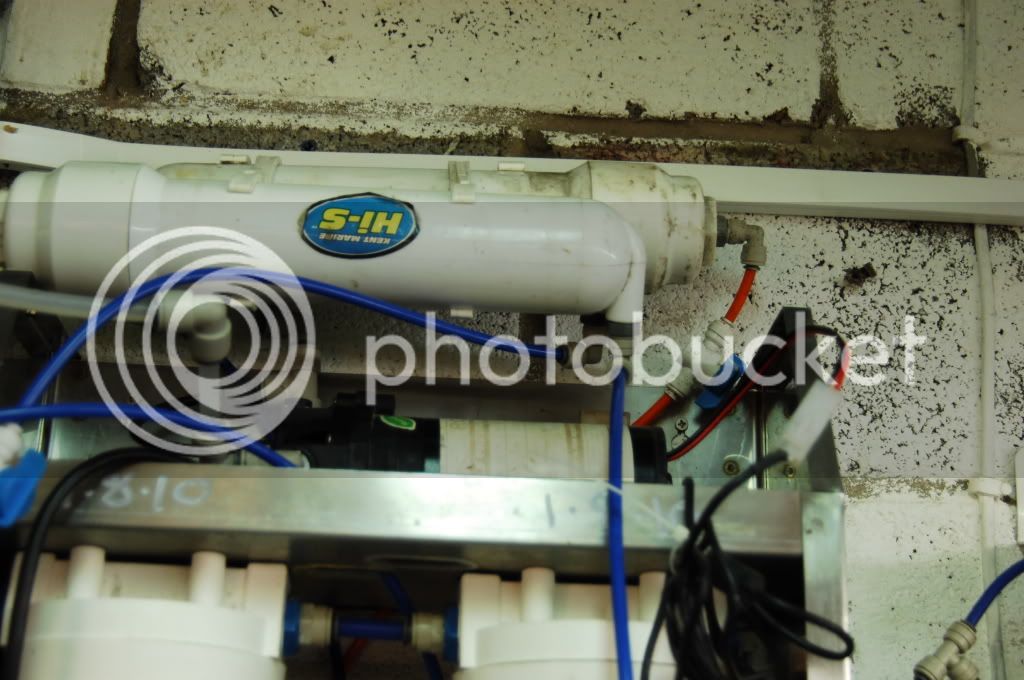 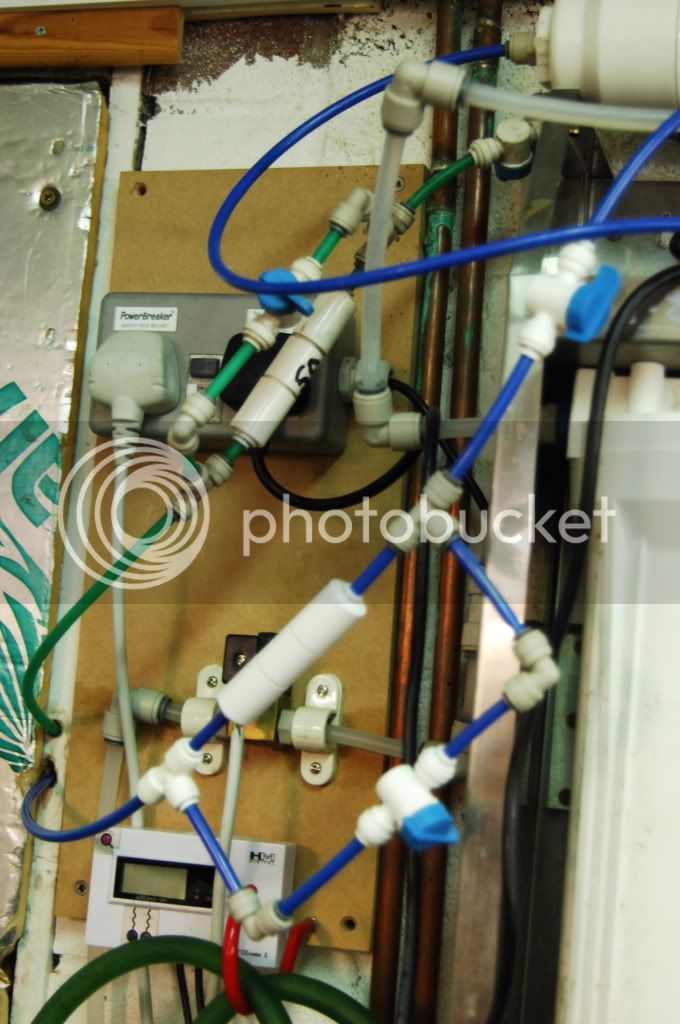 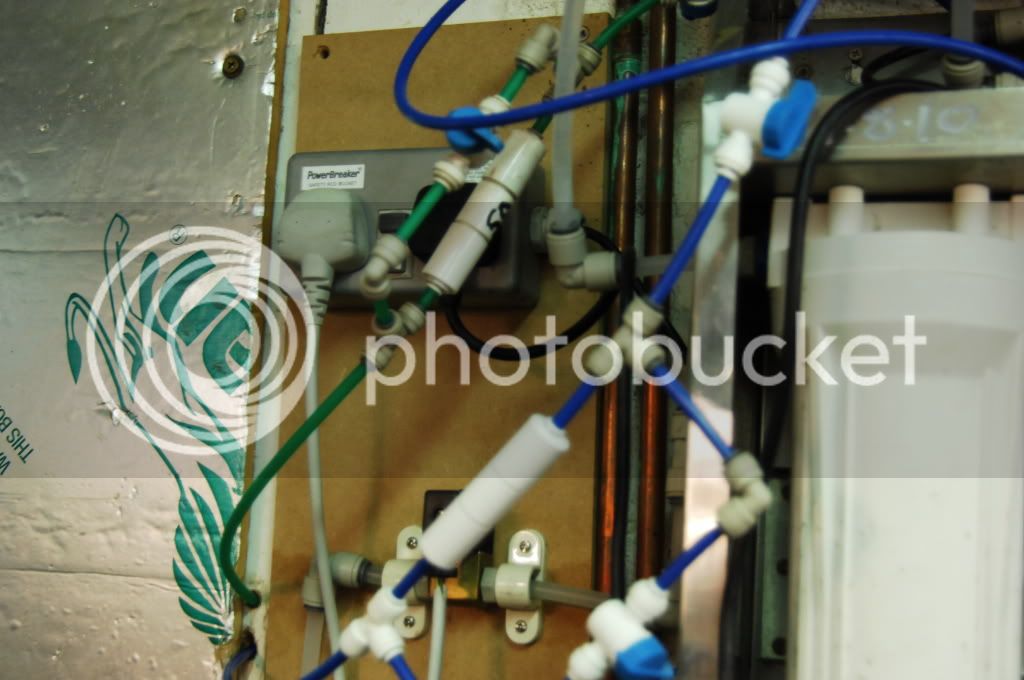 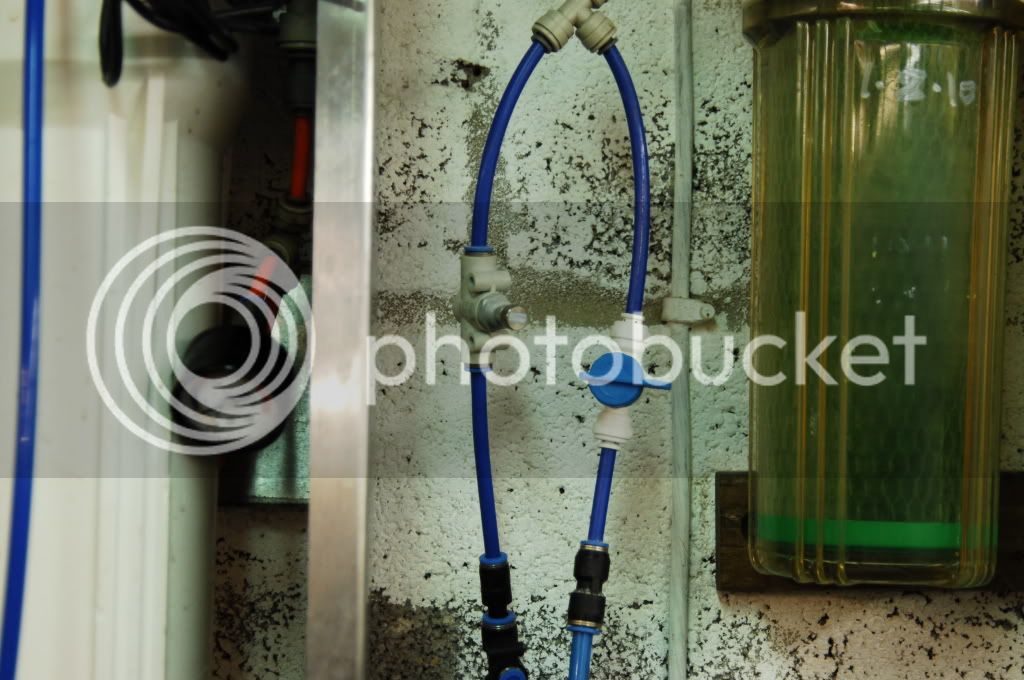 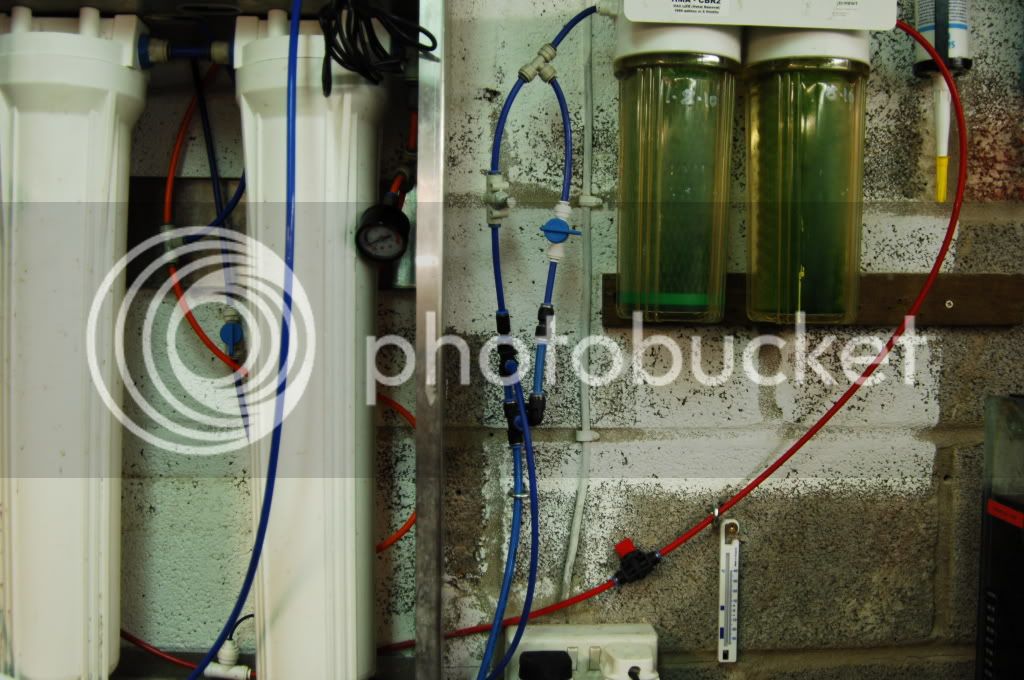 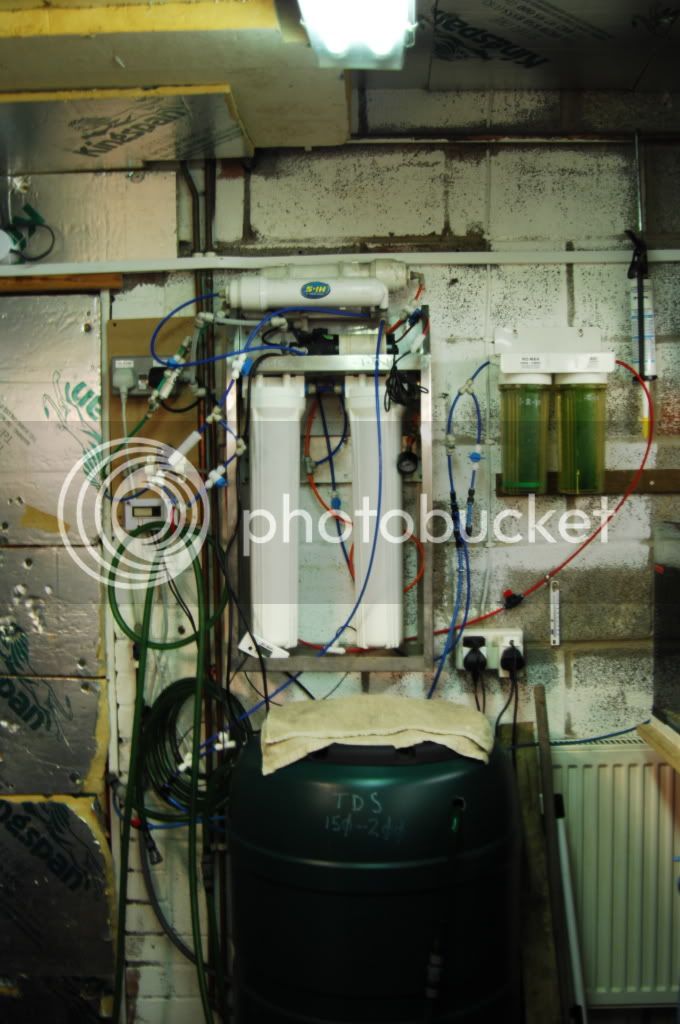 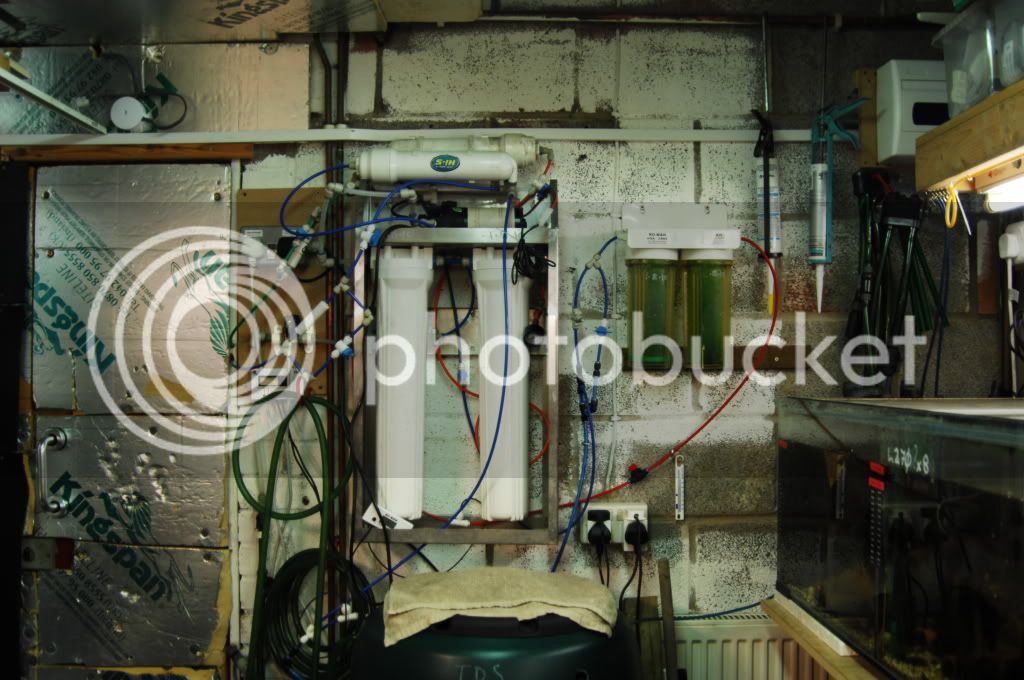 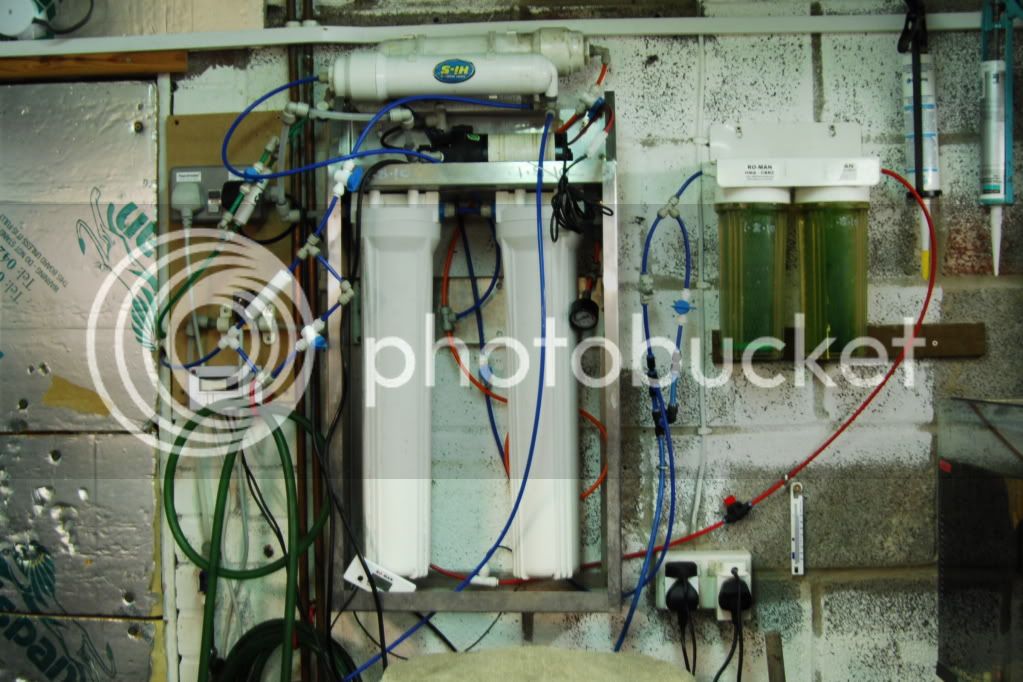 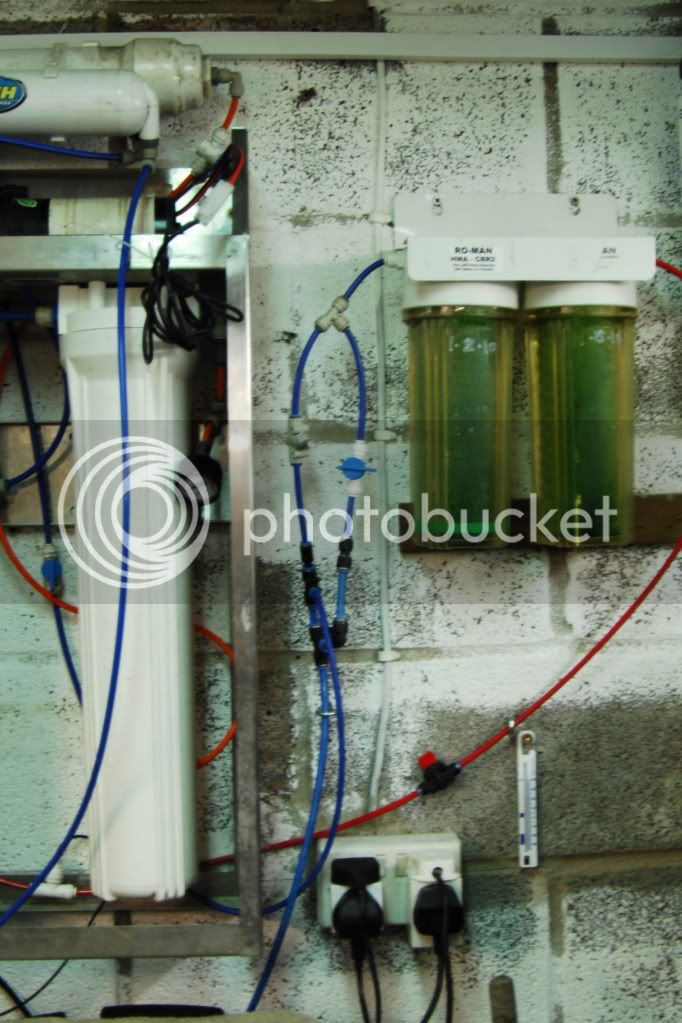 On images 4 and 5, its seems that you have "by-pass" valves, is this correct and what is the function.

Also for a setup like that, how much would it cost to buy and then to run on a monthly basis, as the caninisters, don't they need changing often?
M

hi bob, where do you get your pipe and push fittings from ???
M