Are shrimp safe with bristlenose plecos?

I've always kept cherry shrimp and ghost shrimp in my tanks with my plecos, and I've never thought anything about it. However, I just bought some blue pearls, and I mentioned to the guy I bought them from that I was going to put the shrimp in with a breeding pair of (common I think) bristlenose plecos. He told me he was pretty sure the plecos would kill/eat the shrimp...

In my experience, I've never had a problem with plecos going after my shrimp. However this is a breeding pair, which might affect their temperament? This is also the tank where I keep my extra guppy fry, and the plecos don't seem to mind the guppies. Then again I haven't done daily head counts, or monitored their activities for hours at a time. :dk: There are lots of plants, driftwood and miscellaneous hiding places in the tank.

Should I be worried? Does anyone think that bristlenose plecos will eat/kill/or otherwise harm dwarf shrimp? I've got some blue pearls in a bucket, awaiting your expert opinions...

Thanks in advance.
Amy

Sorry ..Damn it...I missed this post..Bad Mooo...smack.
Bit late now tho..be interested to see how they went? Do you still have them?
YES They can live happily together..I have shrimp in with all my bns and plecs, even in with the carnivorous plecs..Make sure those bns are fed well and you shouldn't have a problem.

Never believe advice from a lfs, Always! come to a forum and ask people who care about the well being of your fish or inverts, not your $$ Bit of luck n you might get a more timely answer :/

sharing a pea & a waffer :clap: 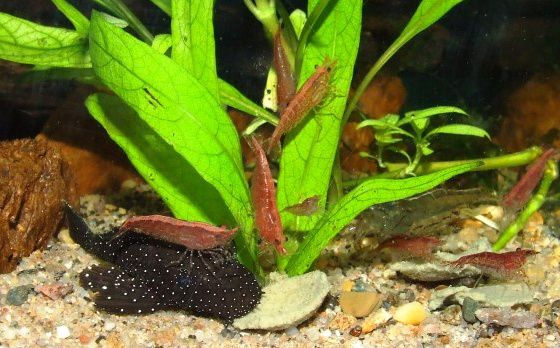 This is a consistent question on other forums. Shrimp and fish don't mix, if it will fit inside the fishes mouth it will get eaten, especially shrimplets as they are so small. I have also personally experienced shrimp being partially eaten because they were to big oo fit in a fishes mouth. If you don't mind loosing the odd shrimp then keep them together. This method lso works better in well planted tanks with lots of hiding places. IMO there is no such thing as a shrimp safe fish. Planet Inverts only lists one type fish that they consider shrimp safe.

Some plecos will eat shrimp especially the little ones but others will not.
I have a couple of anubias in a L260 tank. Leaves are chewed and its not the snails doing it lol. You never can tell what plecos will eat but usually something like the cherry shrimp will breed so prolifically anyway that you don't notice the odd one missing.
I bought 10 cherry shrimp in 2008. I now have 100's if not 1000's in all my tanks.

i have royal whiptails in with my shrimp and they dont touch them... only the greenery on the glass!!!! i have a fresh load of yellow shrimp and cbs and doing head counts and havent lost any!!!
S

I have a tank with only L333's and shrimp, they've been tank mates for over a year and its not crawling with shrimp so they must be snacking on the young shrimp. so every chance bn's will help themselves

L333 will eat shrimp..They have cleaned out my 333 tank..only one shrimp left in there lol it's a Darwin Algae Shrimp....

scobie140 said:
I have a tank with only L333's and shrimp, they've been tank mates for over a year and its not crawling with shrimp so they must be snacking on the young shrimp. so every chance bn's will help themselves
Click to expand...

Bn's (Ancistrus Loricariidae,Vegetarian) are not the same as L333(Hypancistrus, Omnivore)

I have shrimp in all my tanks. I've only ever seen an L-014 hunt down a live cherry shrimp and eat it.
F

So my suggestion would be dont keep shrimp in a breeding plec tank asthe factoring problem is cold water changes 30-40% to*encourage a spawn !
This will kill all shrimpets and all weak shrimp. Weaken the rest so in a week of 2-3 WC s of 30-40% you will have a real problem to get numbers to a safe number losses of up to 70-90% or even more!

Sorry my bad, off the top of my head i thought Bn's were omnivores.
The shrimp are my early warning system of the water quality in the l333 tank, any dead shrimp spotted then water is checked and changed as the l333s are always hiding so would take really bad water to get them out gasping or acting funny.

It's ok Scoobie, on most sites they are described as both, but, They might fool people into thinking they are omnis, but they are true herbivors, they will however eat anything dead or dying, but they shouldn't lol, as their long tummys aren't built for proteins & overdoing the proteins will result in bloat and a dead bn :'o(

Bristlenose are herbivores, eating mainly algae, so feeding algae or spirulina wafers are best for feeding once or twice daily. Granules, flakes, or bloodworms are also good, while the occasional zucchini slices and blanched romaine lettuce or spinach are good treats. Just make sure to never overfeed. Well fed plecos have good coloration so it's easy to tell when their nutritional needs are being met.
http://freshaquarium.about.com/od/catfish2/p/Bristlenose-Catfish.htm

Have a read of this snippit from Doug's ebook..
http://bristlenosecatfish.com/feeding-bristlenose/
Last edited: Aug 6, 2012
R

I know the horse has bolted.
However knowledge is a constant quest.

I have a bristle nose in my Betta tank -
I’m your regular high end Betta freak - large tanks, just for the one fish with a large clean-up crew. Ha

So, I had a shrimp eject himself from the aquarium somehow, perhaps something made him jump(?), however, I found him in the floor several hours later a little worse for wear. He’d severely damaged his pincers so found it hard to feed.
Interestingly the other shrimp seemed to want to help, but for the most part he tried to filter feed and I tried to help.
He survived for 3 weeks, I don’t think he had the energy to slough.

This morning he had given up the ghost.
And the plec thought he was a snack apparently.

It’s a bold assumption to say their herbivores, in my knowledge almost everything aquatic is an omnivorous to varying degrees.

Which is to say if I fed this shrimp to my herbivore horsefield tort, that would mess him up good. Or to my veggie GF, she’s be ill. Haha

Any thought or comments?

Just thought - perhaps he’s after (he is he) the gut contents of the shrimp?
N

Absolutely safe! I’ve bred longfin Bristlenose in a 165 L tank. Had about 200 babies, 4 adults and about 100+ shrimps. No problem. Battled nitrates with 30% water changes every 2 or 3 days. Used no chemicals except Prime to dechlorinate tap water. Moved half of the fish to 2nd tank when babies were 3cm. All sold at around 4/5cm. Lost 1 fish, lost no shrimps. Saw shrims attack and eat a planarian, amazing.
You must log in or register to reply here.
Share:
Facebook Twitter Reddit Pinterest Tumblr WhatsApp Email Link
Top Bottom